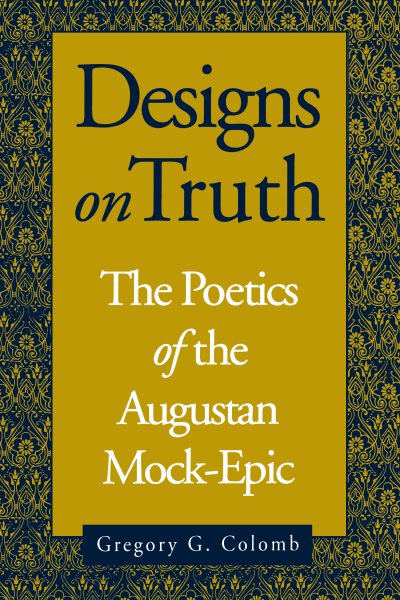 For too long, says Colomb (English, U. of Illinois), we have accepted the interpretation of Augustan mock-epics put forth by scholars of the Romantic movement that immediately followed it. He identifies formal expectations of the genre, discusses the hazy border between historic and poetic concerns, and distinguishes them from the Horatian epistles that they are often lumped with. Annotation copyright Book News, Inc. Portland, Or. Read More
Designs on Truth provides a reinterpretation of Augustan poetry, not as works to be defended before the court of Matthew Arnold and the Romantic tradition but as works that examine the rich relationships among text, culture, and world.In Designs on Truth, Gregory Colomb identifies the characteristics of the mock-epic and argues that the form had developed formal expectations. In making this argument, he explains the intentions of the writers of mock-epics, and expands our conception of the interest and significance of such poems. By demonstrating how these poems are supported by the genre's poetics, he brings out ways these poems differ from other "Augustan" poems such as the Horatian epistles that are often discussed with them.Designs on Truth puts into question the distinction between history and poetry in the mock-epic, examining it at three levels of poetic structure: fable (global narrative structure), and portraits (characterological narrative structure). Focusing chiefly on the mock-epic's representations in terms of class and "kind," this study returns historical particulars to the central role that the poets had always given them and seeks to understand how they are made poetic. Designs on Truth shows how the poems themselves subvert any easy distinction between historical and poetic particulars. This often philosophical genre is itself a reconsideration of the role of reference (fact) and judgment (value) in representation. This study shows how representation and judgment work in the mock-epic, and how together they stand at the heart of the dominant Augustan poetic. Colomb also provides new readings of the mock-epic, including the first comprehensive reading of The Dispensary since the eighteenth century. Read Less

Goodreads reviews for Designs on Truth: The Poetics of the Augustan Mock-Epic

The Craft of Research, Third Edition (Chicago Guides to Writ...

A Manual for Writers of Research Papers, Theses, and Dissert...

The Craft of Research, 2nd edition (Chicago Guides to Writin...