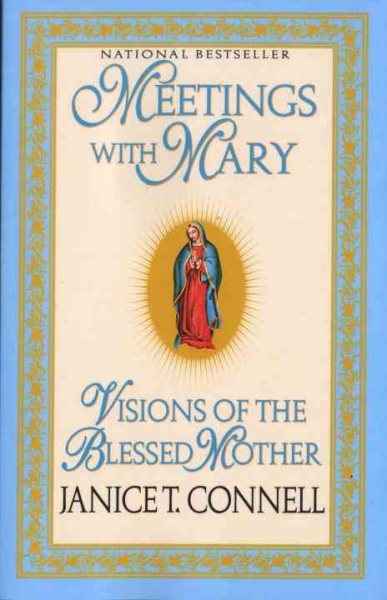 Presents a collection of authenticated visions of and messages from the Virgin Mary, drawn from Scripture, legend, and contemporary accounts Read More
Through the centuries and across the world, the Virgin Mary has appeared to ordinary people of every race and culture, from scholars to illiterates, from the devout to the unbelieving, from young children to the dying. In this exquisite and inspiring volume, Janice T. Connell chronicles authenticated Marian apparitions and messages Mary has brought from God--as mother, comforter, Queen of Angels, and Prophet of the Apocalypse.Drawn from scripture, legend, and never-before-published eyewitness accounts, these are personal stories--the author's own, and her interviews with other visionaries--filled with beauty, wonder, and joy. Meetings with Mary ranges from Elijah's vision of Mary eight hundred years before her birth to the world-famous children of Medjugorje in Bosnia, whose encounters with her began in 1981 and continue daily. Here also are lesser-known, deeply touching encounters with the Mother, from an office worker in Holland to a Japanese nun, from a Jewish banker in Rome to an awestruck crowd of visionaries, few of them Christians or of any other faith, in Egypt.Meetings with Mary asks also: as the millennium draws near, shadowed by disasters, disease, and brutal civil warfare, are Mary's frequent appearances a signal to the faithful? Perhaps she is calling us all to join her now on a voyage toward the eternal shores of peace, joy, and abiding love. . . . "[Connell is] passionate about prayer and sharing her love of Jesus'mother. . . . She has a way of simplifying complex theology."--Rocky Mountain News Read Less

Goodreads reviews for Meetings with Mary: Visions of the Blessed Mother

Meetings with Mary: Visions of The Blessed Mother