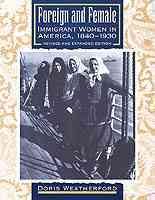 Immigrant women from various ethnic groups share their feelings about their homelands, men, families, work, and other major facets of their lives Read More
From 1840 to 1930 the United States received the greatest number of immigrants in its history. Of these immigrants, four of every ten were female. While much has been written about the American immigrant experience, the stories of immigrant women have remained largely untold. Doris Weatherford's Foreign and Female offers a vivid account of life in America for European female immigrants, many of whom were our grandmothers and great-grandmothers.Drawing from the letters and diaries of immigrant women, the author records what life was like for female newcomers to America: how they lived, what they ate, how they worked, how they married, and much, much more. Delving even further, Foreign and Female records the inner thoughts and concerns of these women, revealing their views on a range of subjects, including marriage, divorce, childbirth, and religion. Although the experiences of immigrant women differed from region to region and from situation to situation, Foreign and Female accurately describes what life was like for a variety of women - on the farm, in the factory, in the city, out West, and in the home. Read Less

Goodreads reviews for Foreign and Female: Immigrant Women in America, 1840-1930

The Year-book for colorists and dyers, presenting a review o...