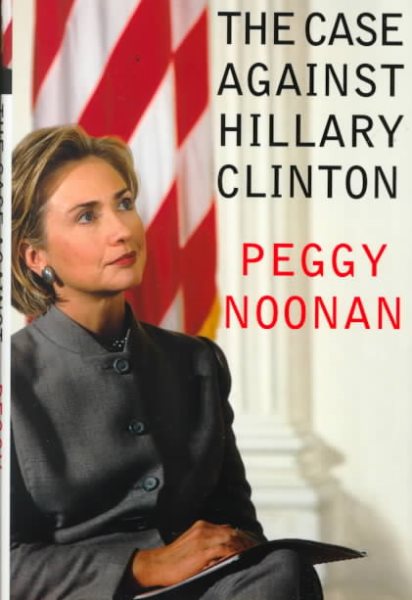 A former speechwriter for Ronald Reagan assesses the First Lady's life and career, asking key questions about her integrity, her record, and her political ambitions Read More
As the long, scandal-ridden trial of the Clinton years comes to an end--and as the first lady mounts her own campaign for independent political office--it is time for a summation. What is the legacy of Clintonism? What is there in Hillary Clinton's background, talents, or record of achievement that qualifies her to represent New York in the U.S. Senate? And, most important, what will happen if Hillary should win this fall? Where will her ambition lead her next?Peggy Noonan, one of our most astute political observers and a speechwriter for the Reagan White House, argues in this passionate and compelling book that everyone in the United States--not just New Yorkers--must look closely at Hillary and the implications of her Senate bid. The Case Against Hillary Clinton offers an eye-opening assessment of the scandals, and failures of the Clinton years, from Whitewater to health care to the Filegate and Travelgate affairs--casting a revealing light on the first lady's motives and behavior. It poses searching questions about the difference between the citizens of New York and the Clintons of Arkansas; between public service and lip service; between the whole truth and the shameless parade of evasion and spin the first couple has marshaled throughout their White House years. And finally, in these pages Noonan calls on us to consider the climate of deception and disgrace the Clintons have left in their wake--weakening our nation's moral standing and damaging our political process in ways that will take years to heal.Never before has the character of a first lady been so integral to the fate of a presidential administration and no writer before Peggy Noonan has had the courage to offer so uncompromising an estimation of Hillary Clinton as the one contained in this book. The Case Against Hillary Clinton takes the measure of the woman, the candidate, the striving politician--and offers a convincing argument that her calculated bid for power will be the first truly important election of the new millennium.I thought, seven years ago, that the Clintons might turn out to be inspiring. They had guts, came from nowhere, were bright and hard-driving; he was educated, credentialed, a political moderate but not a boring one; she appeared to be something new and interesting, a modern woman who operated with confidence in all the circles of the world.... Hillary could have been a strong and encouraging presence, maybe continuing to work in the world as a lawyer, as Cherie Blair has in Great Britain--a judge, working mother, and "first lady" who is everywhere a figure of respect.What a presidency this would have been. What a legacy they would have left .What did the Clintons do with their two administrations? They left behind a country more damaged, more removed from its old, rough idealism; a country whose children live in a coarser and more dangerous place; a country whose political life has been distorted and lowered.... And for this reason, for all of these reasons, Clintonism should not be allowed to continue.And if it is not to continue, the next great battle may prove to be the decisive one, and that is the battle of New York.-- From The Case Against Hillary Clinton Read Less

Goodreads reviews for The Case Against Hillary Clinton

Life, Liberty, and the Pursuit of Happiness

The Time of Our Lives: Collected Writings

When Character Was King: A Story of Ronald Reagan