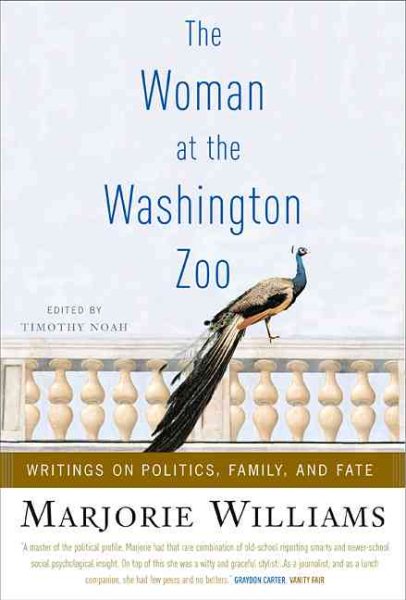 One of Washington's finest writers on people, politics, and life ? collected for the first time. Read More
Marjorie Williams knew Washington from top to bottom. Beloved for her sharp analysis, elegant prose and exceptional ability to intuit character, Williams wrote political profiles for the Washington Post and Vanity Fair that came to be considered the final word on the capital's most powerful figures. Her accounts of playing ping-pong with Richard Darman, of Barbara Bush's stepmother quaking with fear at the mere thought of angering the First Lady, and of Bill Clinton angrily telling Al Gore why he failed to win the presidency ? to name just three treasures collected here ? open a window on a seldom-glimpsed human reality behind Washington's determinedly blank façade. Williams also penned a weekly column for the Post's op-ed page and epistolary book reviews for the online magazine Slate. Her essays for these and other publications tackled subjects ranging from politics to parenthood. During the last years of her life, she wrote about her own mortality as she battled liver cancer, using this harrowing experience to illuminate larger points about the nature of power and the randomness of life. Marjorie Williams was a woman in a man's town, an outsider reporting on the political elite. She was, like the narrator in Randall Jarrell's classic poem, "The Woman at the Washington Zoo," an observer of a strange and exotic culture. This splendid collection ? at once insightful, funny and sad ? digs into the psyche of the nation's capital, revealing not only the hidden selves of the people that run it, but the messy lives that the rest of us lead. Read Less

Goodreads reviews for The Woman at the Washington Zoo: Writings on Politics, Family, and Fate

The Woman at the Washington Zoo: Writings on Politics, Famil...