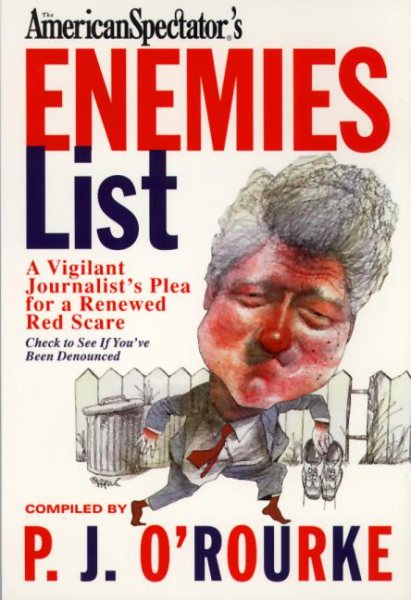 An acerbic blacklist of some of the most disliked people of the 1990s includes Sting, Gore Vidal, Noam Chomsky, and Ralph Nader Read More
Written with the same acerbic wit and infectious humor that has made P. J. O'Rourke one of the most popular political satirists of all time, The Enemies List will keep you howling and his enemies scowling. From Noam Chomsky to Yoko Ono, from Peter, Paul, and Mary (yes, they're still alive) to all the people who think quartz crystals cure herpes, from Ralph Nader to the entire country of Sweden, P. J. O'Rourke has created a roster of the most useless, politically disgraceful, and downright foolish people around. Although a rating system of S=Silly, VS=Very Silly, SML=Shirley MacLaine was ultimately cast aside, the distinguishing feature of the cluster of dunces presented here is silliness, not political subversion. The Enemies List began as an article in the American Spectator and, as readers contributed their own suggestions, quickly grew into a hilarious and slashing commentary on politicians and celebrities alike. Now they have been named, we just need to figure out what to do with them. "To say that P. J. O'Rourke is funny is like saying that the Rocky Mountains are scenic - accurate but insufficient." - Chicago Tribune Read Less

Ruined By Reading: A Life in Books