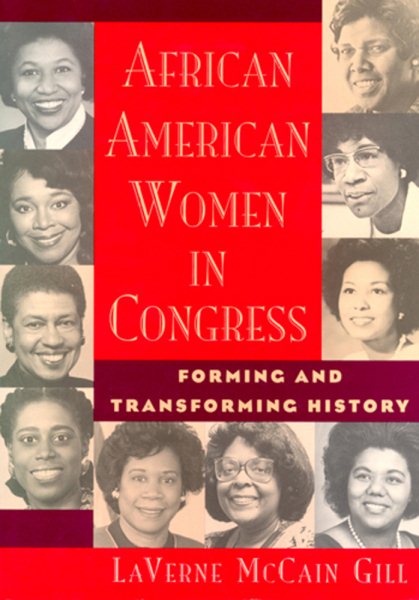 Profiles the life and careers of fifteen African American women, including Shirley Chisholm, Katie Hall, amd Eva Clayton Read More
Shirley Chisholm, the first Black woman in the U.S. House of Representatives, was elected in 1968. That was nearly a hundred years after the election of the first African American man to Congress and fifty years after the first woman. A quarter of a century after Chisholm's election, the first Black woman, Carol Moseley-Braun, was elected to the United States Senate. It was not until 1993, when ten additional Black women won seats in the 103rd Congress, that African American women were allowed to serve their country and their constituencies in any substantial numbers. In 1997 that historic moment will very likely be lost as congressional districts are redrawn by court order. This remarkable book by LaVerne Gill preserves the history of the struggles and accomplishments of these fifteen courageous women, and will move others to learn from and follow their example.African American Women in Congress details the life and career histories of Shirley Chisholm, Barbara Jordan, Yvonne Burke, Cardiss Collins, Katie Hall, Eleanor Holmes Norton, Maxine Waters, Barbara-Rose Collins, Carol Moseley-Braun, Corinne Brown, Carrie Meek, Cynthia McKinney, Eva Clayton, Eddie Bernice Johnson, and Sheila Jackson-Lee. Each profile contains a picture of its subject, interview material, and resumés. Arranged chronologically, the book introduces the reader to issues of vital importance to the Black community—Reconstruction, enfranchisement, lynchings and harassment, civil rights struggles, the founding of advocacy groups, the power of the Congressional Black Caucus, the creation of majority minority districts that allowed greater representation in Congress, the struggle of largely Black Washington, D.C., for representation, and the recent dismantling of past gains by a Republican majority. Gill also describes the uphill battles for social justice and the rights of women that the fifteen women had to wage even within their own political parties, political organizations, and districts.For general readers, high school and college students, and anyone interested in the political process, this book is illuminating and inspiring reading. Read Less

Daughters of Dignity: African Women in the Bible and the Vir...