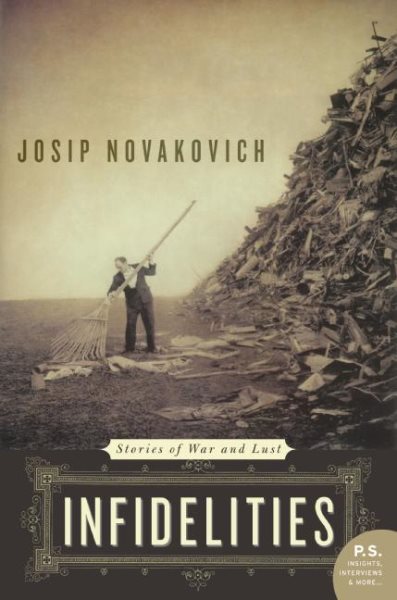 Soldiers and civilians from all sides--Serbian, Croatian, and Bosnia Muslim--become caught up in the tragic consequences and contradictions of war as armies clash in the former Yugoslavia from World War I Sarajevo to refugees in contemporary America, in a collection of short fiction. Reader's Guide available. Original. 25,000 first printing. Read More
Tragicomedy of the highest order, this stellar collection is Croatian writer Novakovich's best ever. Hailed as one of the best short story writers of the 1990s, Josip Novakovich was praised by the New York Times for writing fiction that has "the crackle of authenticity, like the bite of breaking glass." In his new collection, he explores a war–torn Balkan world in which a schoolchild's innocence evaporates in a puff of cannon smoke, lust replaces love, and the joy of survival overrides all other pleasures. As Serb, Croat, and Bosnian Muslim armies clash in the cities and countryside of the former Yugoslavia, it's hard to tell the front lines from the home front. The characters in Infidelities––soldiers and civilians alike––are caught in the ridiculous, often cruelly whimsical contradictions of war and the paranoia and folly of those who conduct it. In "Ribs," a Croatian woman whose husband has already been taken by the war will go to any length to keep her son out of the army, including sleeping with the draft officer, a tryst that leads to an unexpected, and disturbing, spiritual vision. A Buddhist soldier in the Bosnian Muslim military isly accused of being an informer to the enemy Serbs after his detachment ambushes itself in "Hail." A draft dodger is in the hospital for a transplant, in "A Purple Heart," when a high–ranking Croatian general steals the heart for himself (and dies) while the dodger suddenly discovers a new thirst for life. In "Spleen," a Bosnian émigré in America learns that even in the throes of passion she cannot find release from the haunting memories of her homeland. These stories cover a broad sweep of time, reaching back to the first shots of World War I in Sarajevo and forward to the plight of Balkan immigrants in contemporary America. Throughout, acts of compassion, gallows humour, even desire arise from a landscape devastated by tragedy. Read Less

Goodreads reviews for Infidelities: Stories of War and Lust (P.S.)