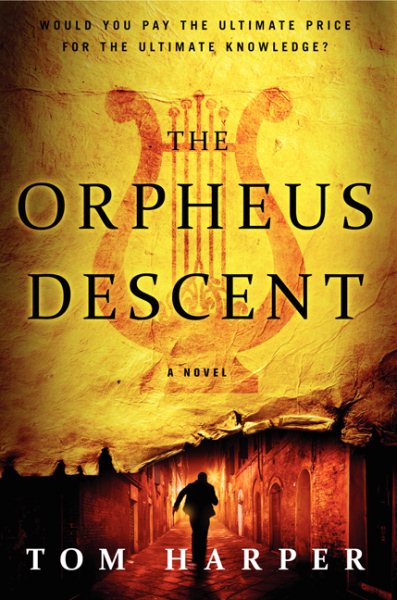 Discovering a new golden tablet that is the key to Hell, archaeologist Lily Barnes disappears, and her husband Jonah will stop at nothing, including venturing into the Underworld itself, in order to find her. Read More
A cerebral literary thriller in the vein of Dan Brown, Matthew Pearl, and Sam Bourne, The Orpheus Descent follows classical philosopher Plato on a mysterious journey to Italy that will ignite a conspiracy that burns into the present.The greatest thinker in human history, Plato, travels to Italy seeking initiation into the Orphic mysteries: the secret to the Underworld known only to the gods. But the knowledge he discovers is terrifying.Two millennia later, twelve ancient golden tablets secreted in museums around the world hold sacred information known to only a few—the pathway the dead must follow to the afterlife. And archaeologist Lily Barnes has just found another on a dig in southern Italy. But this tablet is far more valuable—and dangerous—than the rest. It holds the key to hell itself.Now, Lily is gone and her husband, Jonah, is desperate to find her. He knows she is alive—and in mortal danger—and he’s willing to go to hell itself to find her. But the deeper he descends on this dark and twisting journey, the more Jonah’s fear rises, for not everyone who travels where Lily has gone will find their way back. . . . Read Less

Goodreads reviews for The Orpheus Descent: A Novel

Siege of Heaven (Novels of the Crusades)

I Choose to Fight