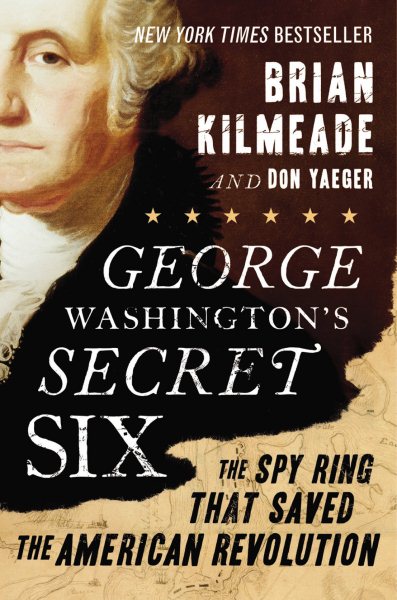 Shares the true story of an anonymous group of spies who played important roles in winning the Revolutionary War, documenting how they risked their lives to obtain crucial intelligence for General Washington using sophisticated tactics and complex codes. Read More
“As a Long Islander endlessly fascinated by events that happened in a place I call home, I hope with this book to give the secret six the credit they didn’t get in life. The Culper spies represent all the patriotic Americans who give so much for their country but, because of the nature of their work, will not or cannot take a bow or even talk about their missions.”—Brian KilmeadeWhen General George Washington beat a hasty retreat from New York City in August 1776, many thought the American Revolution might soon be over. Instead, Washington rallied—thanks in large part to a little-known, top-secret group called the Culper Spy Ring.Washington realized that he couldn’t beat the British with military might, so he recruited a sophisticated and deeply secretive intelligence network to infiltrate New York. So carefully guarded were the members’ identities that one spy’s name was not uncovered until the twentieth century, and one remains unknown today. But by now, historians have discovered enough information about the ring’s activities to piece together evidence that these six individuals turned the tide of the war.Drawing on extensive research, Brian Kilmeade and Don Yaeger have painted compelling portraits of George Washington’s secret six:Robert Townsend, the reserved Quaker merchant and reporter who headed the Culper Ring, keeping his identity secret even from Washington;Austin Roe, the tavern keeper who risked his employment and his life in order to protect the mission;Caleb Brewster, the brash young longshoreman who loved baiting the British and agreed to ferry messages between Connecticut and New York;Abraham Woodhull, the curmudgeonly (and surprisingly nervous) Long Island bachelor with business and family excuses for traveling to Manhattan;James Rivington, the owner of a posh coffeehouse and print shop where high-ranking British officers gossiped about secret operations;Agent 355, a woman whose identity remains unknown but who seems to have used her wit and charm to coax officers to share vital secrets.In George Washington’s Secret Six, Townsend and his fellow spies finally receive their due, taking their place among the pantheon of heroes of the American Revolution. Read Less