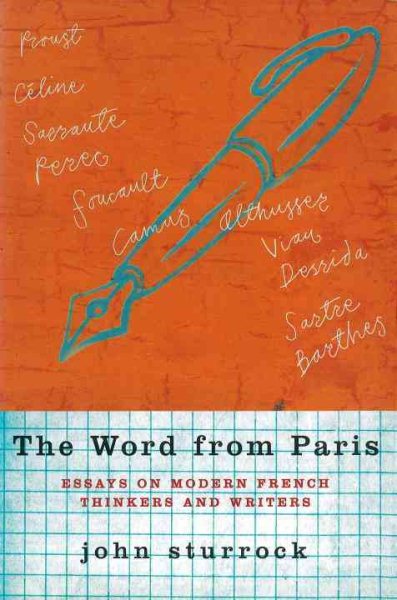 An elegant guide to twentieth-century French literature and thought. "The Word from Paris" is a lucid and accessible guide to the literature and thought of twentieth-century France. John Sturrock ranges over the broad landscape of French writing, clarifying the various intellectual movements that have marked its recent history. In a series of definitive essays, John Sturrock discusses writers such as Proust, Celine, Sarraute and Perec; thinkers such as Foucault, Althusser, Lacan and Derrida; and that peculiarly French figure, the writer/thinker: Sartre, Camus and Barthes. He analyses such developments as Existentialism, the New Novel, Structuralism and the OuLiPo. This elegant and illuminating journey through both celebrated and sometimes relatively neglected texts is an invaluable initiation into French intellectual and literary culture this century. Read More
French writing and French thought have always been held in a certain glamorous esteem. For young, radical philosophers of the 1960s searching out intellectual enlightenment in Left Bank cafes and bookshops, for serious-minded semiologists wishing to deconstruct everything around them, and for fans of the formal novel, France has remained a source of stimulation and fresh ideas.John Sturrock has written for many years about French literature and thought, and here presents a wonderfully accessible guide to the major figures of the last fifty years. Reviewing the various movements that have dominated the French intellectual scene—existentialism, the nouveua roman, structuralism, the OuLiPo—he illustrates how their proponents inspire and excite. How Jean-Paul Sartre, originally an author of little-known fiction, fused politics and philosophy to become one of the best known public intellectuals of the century; how Jacques Lacan’s flamboyantly expressed ideas made him a hero to professors of literature while offending many of his fellow psychoanalysts; and how Boris Vian, who trained as an engineer, celebrated in his writing much of what was enjoyable to the French about America: jazz music, a mysterious criminal underworld, an irrevocable youthfulness.Written with great elegance and expertise, the essays in The Word from Paris make for an illuminating journey through the intellectual and cultural terrain of twentieth-century France. Read Less

Goodreads reviews for The Word From Paris: Essays on Modern French Thinkers and Writers

Notre-Dame of Paris (The Hunchback of Notre Dame)