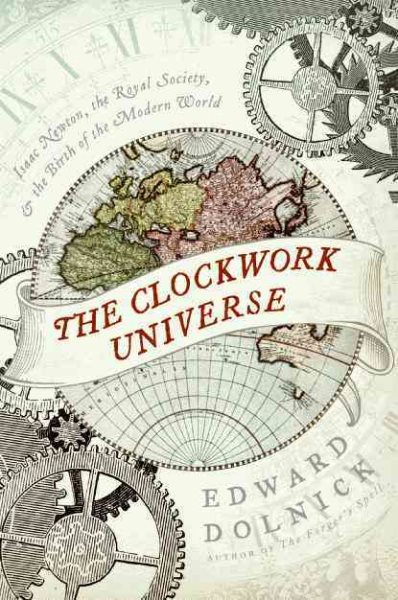 A 350th anniversary tribute to the Royal Society documents the work of late seventeenth-century scientific geniuses who, in spite of period ignorance, forged lasting understandings about the organization of the universe. Read More
The New York Times bestselling author and acclaimed science writer Edward Dolnick brings to light the true story of a pivotal moment in modern history, when a group of strange, tormented geniuses---including Isaac Newton---invented science and remade our understanding of the world.The Clockwork Universe is the story of a band of men who lived in a world of dirt and disease but pictured a universe that ran like a perfect machine. A meld of history and science, this book is a group portrait of some of the greatest minds who ever lived as they wrestled with nature's most sweeping mysteries. The answers they uncovered still hold the key to how we understand the world.At the end of the seventeenth century---an age of religious wars, plague, and the Great Fire of London---when most people saw the world as falling apart, these earliest scientists saw a world of perfect order. They declared that, chaotic as it looked, the universe was in fact as intricate and perfectly regulated as a clock. This was the tail end of Shakespeare's century, when the natural and the supernatural still twined around each other. Disease was a punishment ordained by God, astronomy had not yet broken free from astrology, and the sky was filled with omens. It was a time when little was known and everything was new. These brilliant, ambitious, curious men believed in angels, alchemy, and the devil, and they also believed that the universe followed precise, mathematical laws---a contradiction that tormented them and changed the course of history.The Clockwork Universe is the fascinating and compelling story of the bewildered geniuses of the Royal Society, the men who made the modern world. Read Less

Goodreads reviews for The Clockwork Universe: Isaac Newton, the Royal Society, and the Birth of the Modern World

The Forger's Spell: A True Story of Vermeer, Nazis, and the...

Down the Great Unknown: John Wesley Powell's 1869 Journey of...

The Clockwork Universe: Isaac Newton, the Royal Society, and...