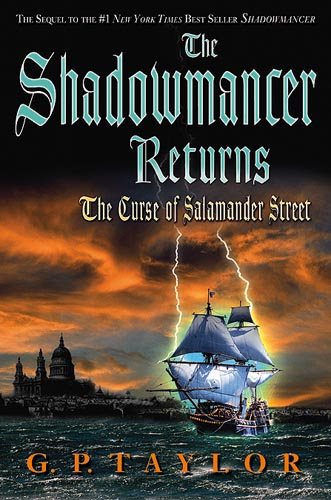 Having barely escaped the evil sorcerer Demurral, Kate and Thomas set sail to London, hoping to make a fresh start, while Raphah, who has had a narrow escape of his own, begins a terrifying journey to find his friends. Read More
?FROM NEW YORK TIMES BEST SELLING AUTHOR His first novel, Shadowmancer, reached #1 on the New York Times Best Sellers List in 2004 and has been translated into 48 languages. The second novel, Wormwood is another New York Times best seller which was nominated for a Quill Book Award.  G. P. Taylor also authored Tersias the Oracle, and Mariah Mundi. The Shadowmancer Returns Can evil ever be destroyed? G. P. Taylor adds a higher definition to fiction in this sequel to Shadowmancer. Kate and Thomas have escaped the sorcerer Demurral and sailed to London with charismatic Jacob Crane. But trouble lies in wait when their ship is seized and they are lured into the darkest heart of the city— to a street that will change their reality and their lives. Further north, Raphah returns and is joined by the most unlikely companion, Demurral’s old crony, Beadle. They join together for a terrifying journey in search of their friends. Along the way, unknown enemies and a shadowy beast disturb and torment them. All paths lead to one place: a cursed street, hidden from the world—a place where souls are lost, fates are decided, and old enemies seek their revenge.  Read Less

Goodreads reviews for The Shadowmancer Returns: The Curse of Salamander Street