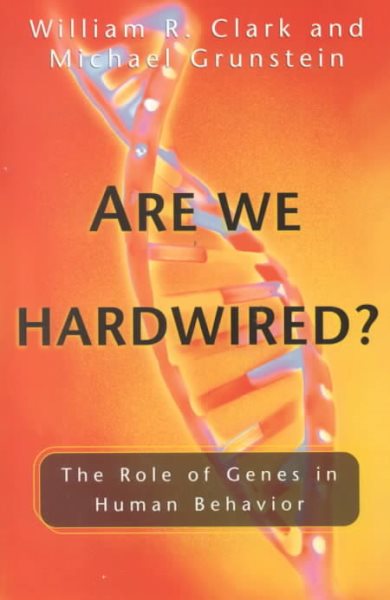 An investigation of the nature-nuture debate presents the latest scientific information on the role of genetics in human behavior. Read More
Books such as Richard Dawkins's The Selfish Gene have aroused fierce controversy by arguing for the powerful influence of genes on human behavior. But are we entirely at the mercy of our chromosomes? In Are We Hardwired?, scientists William R. Clark and Michael Grunstein say the answer is bothyes--and no. The power and fascination of Are We Hardwired? lie in their explanation of that deceptively simple answer. Using eye-opening examples of genetically identical twins who, though raised in different families, have had remarkably parallel lives, the authors show that indeed roughly half of humanbehavior can be accounted for by DNA. But the picture is quite complicated. Clark and Grunstein take us on a tour of modern genetics and behavioral science, revealing that few elements of behavior depend upon a single gene; complexes of genes, often across chromosomes, drive most of ourheredity-based actions. To illustrate this point, they examine the genetic basis, and quirks, of individual behavioral traits--including aggression, sexuality, mental function, eating disorders, alcoholism, and drug abuse. They show that genes and environment are not opposing forces; heredity shapeshow we interpret our surroundings, which in turn changes the very structure of our brain. Clearly we are not simply puppets of either influence. Perhaps most interesting, the book suggests that the source of our ability to choose, to act unexpectedly, may lie in the chaos principle: the most minutedifferences during activation of a single neuron may lead to utterly unpredictable actions. This masterful account of the nature-nurture controversy--at once provocative and informative--answers some of our oldest questions in unexpected new ways Read Less

Goodreads reviews for Are We Hardwired?: The Role of Genes in Human Behavior

Sex and the Origins of Death

A Means to an End: The Biological Basis of Aging and Death

The Experimental Foundations of Modern Immunology