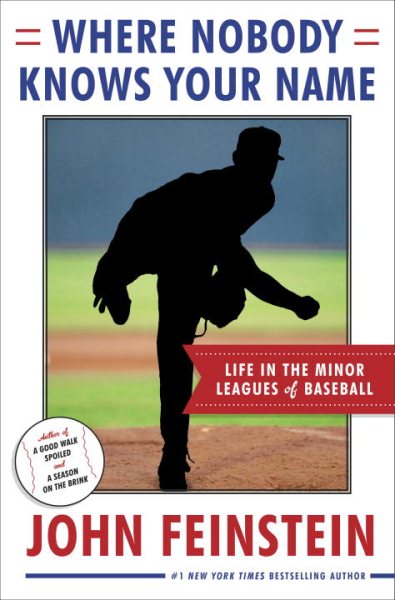 Explores the secretive inner-workings of the minor leagues through the stories of eight men who are living on the cusp of the dream--some who have tasted major league success and some who have toiled for long careers. Read More
From the acclaimed #1 bestselling author . . . a riveting journey through the world of minor-league baseball“No one grows up playing baseball pretending that they’re pitching or hitting in Triple-A.” —Chris Schwinden, Triple-A pitcher“If you don’t like it here, do a better job.” —Ron Johnson, Triple-A managerJohn Feinstein gave readers an unprecedented view of the PGA Tour in A Good Walk Spoiled. He opened the door to an NCAA basketball locker room in his explosive bestsellerA Season on the Brink. Now, turning his eye to our national pastime, sports journalist John Feinstein explores the colorful and mysterious world of minor-league baseball—a gateway through which all major-league players pass in their careers . . . hoping never to return.Baseball’s minor leagues are a paradox. For some players, the minors are a glorious launching pad toward years of fame and fortune; for others, a crash-landing pad when injury or poor play forces a big leaguer back to a life of obscure ballparks and cramped buses instead of Fenway Park and plush charter planes. Focusing exclusively on the Triple-A level, one step beneath Major League Baseball, Feinstein introduces readers to nine unique men: three pitchers, three position players, two managers, and an umpire. Through their compelling stories, Feinstein pulls back the veil on a league that is chock-full of gifted baseball players, managers, and umpires who are all one moment away from getting called up—or back—to the majors.The stories are hard to believe: a first-round draft pick and pitching ace who rocketed to major-league success before finding himself suddenly out of the game, hatching a presumptuous plan to get one more shot at the mound; a home run–hitting former World Series hero who lived the dream, then bounced among six teams before facing the prospects of an unceremonious end to his career; a big-league All-Star who, in the span of five months, went from being completely out of baseball to becoming a star in the ALDS, then signing a $10 million contract; and a well-liked designated hitter who toiled for eighteen seasons in the minors—a record he never wanted to set—before facing his final, highly emotional chance for a call-up to the big leagues.From Raleigh to Pawtucket, from Lehigh Valley to Indianapolis and beyond, Where Nobody Knows Your Name gives readers an intimate look at a baseball world not normally seen by the fans. John Feinstein gets to the heart of the human stories in a uniquely compelling way, crafting a masterful book that stands alongside his very best works. Read Less

Goodreads reviews for Where Nobody Knows Your Name: Life In the Minor Leagues of Baseball