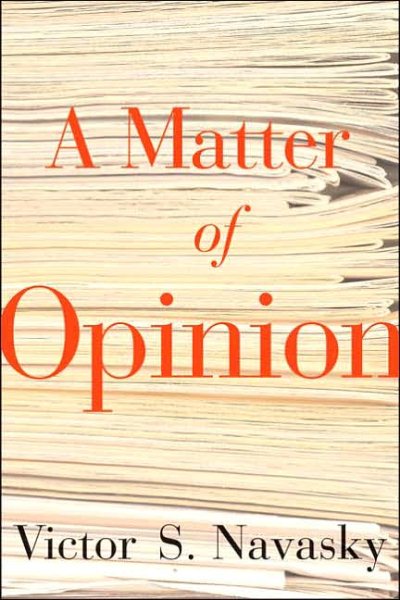 The author reflects on his journalistic experiences and offers a spirited argument for independent journals of opinion as vital to the health of democracy. Read More
Victor S. Navasky is the renowned editor, writer, and teacher who has been at the helm of The Nation for almost thirty years. A Matter of Opinion, a scintillating reflection on his journalistic experiences, is also an extraordinary political document-a spirited, provocative argument for independent journals of opinion as vital to the health of democracy.Whether at the satirical magazine Monocle (which he founded when he was in law school), or at The New York Times, or finally at The Nation, Navasky's commitment to political engagement and to the social and intellectual values of independent cultural activity has always been front and center. In a wonderfully entertaining narrative, he tells of his innovative efforts to find money to keep The Nation afloat and to keep its pages lively, honest, and relevant, and he embellishes it with unforgettable stories-about his colleagues and opponents, from E. L. Doctorow to Bill Buckley; his heroes, from I. F. Stone to Jürgen Habermas; and his precedessors, from Daniel Defoe to Carey McWilliams. Navasky's accomplishments have been legion, despite the threats of revenue-driven multinational media corporations, and despite the sometimes ugly, sometimes hilarious problems that fearless muckrakers face in any culture. A Matter of Opinion is a passionately written, irresistibly charming account of a great journalistic tradition. Read Less

Goodreads reviews for A Matter of Opinion

The Experts Speak : The Definitive Compendium of Authoritati...

Mission Accomplished! Or How We Won the War in Iraq: The Exp...