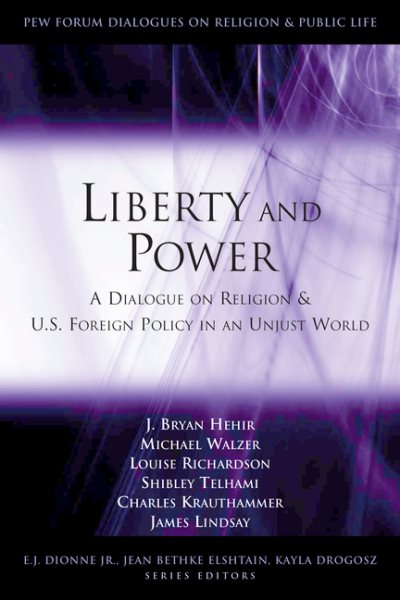 Contributors examine the relationship between various religious, moral, and ethical traditions in light of recent US foreign policy decisions about preemptive war, terrorism, multilateralism, and deterrence. Hehir (religion and public life, Kennedy School of Government, Harvard) and Michael Walzer (social science, Institute for Advanced Study, Princeton U.) begin with essays on different moral traditions, with Hehir examining the tradition of Niebuhr and Walzer working from a broader moral standpoint. Their respondents acknowledge that some form of ethics or faith tradition has long been a part of government policy, whether functioning as an unseen foundation or a clear motive for action; they differ on exactly how effective that influence has been and will be. Each essay contains its own references. Annotation ©2004 Book News, Inc., Portland, OR (booknews.com) Read More
What role should religion play in shaping and implementing U.S. foreign policy?The dominant attitude over the last half century on the subject of religion and international relations was expressed well by Dean Acheson, Harry Truman's secretary of state: "Moral Talk was fine preaching for the Final Day of Judgment, but it was not a view I would entertain as a public servant." Was Acheson right? How a nation "commits itself to freedom" has long been at the heart of debates about foreign aid, economic sanctions, and military intervention. Moral and faith traditions have much to say about what is required to achieve this end. And after September 11, no one can doubt the importance of religious beliefs in influencing relations among peoples and nations. The contributors to this volume come at the issue from very different perspectives and offer exceptional and unexpected insights on a question now at the forefront of American foreign policy. Read Less

Goodreads reviews for Liberty and Power: A Dialogue on Religion and U.S. Foreign Policy in an Unjust World (Pew Forum Dialogues on Religion & Public Life)

The Stakes: America And The Middle East

The Stakes: America In The Middle East

The Stakes: Univ Of Md Edition