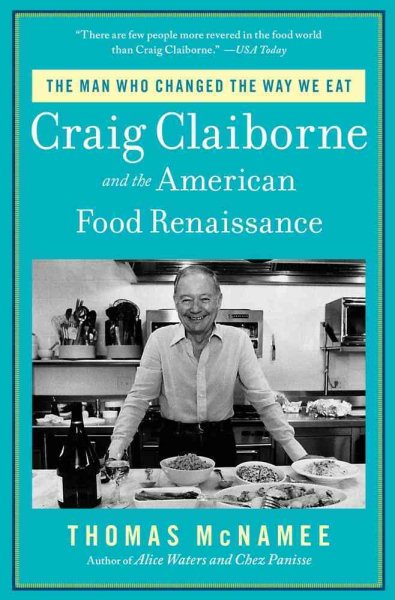 The author of Alice Waters and Chez Panisse presents a vivid account of the influential New York Times food critic's culinary and personal life, providing coverage of such topics as his role in launching major chefs to fame, his turbulent sexual life and his efforts to introduce the American public to the standards of fine international cuisine. Original. Read More
&apos;A big juicy dish bubbling with scandals and rivalries, thickened with oft-told secrets, chock full of random bits as if a boxful of mementos had been upended into the stew. Dig in, and it is likely to persuade you that this Clark Kent of a food editor really did exert superpowers on the cultural life of twentieth-century America&apos; (The Washington Post).In 1957, America was a gastronomic wasteland. One man changed all that. From his perch at the New York Times, Craig Claiborne led America&apos;s food revolution. He took readers where they had never been before, and brought Julia Child and Jacques Pépin to national acclaim. He introduced us to the foods and tools we take for granted today, from crème fraîche and balsamic vinegar to arugula and the salad spinner. And he turned dinner into an event&apos;dining out, delighting your friends, or simply cooking for your family. But the passionate gastronome led a conflicted personal life. Forced to mask his sexuality, he was imprisoned in solitude and searched for stable and lasting love. In The Man Who Changed the Way We Eat, acclaimed biographer Thomas McNamee unfolds a new history of American gastronomy and reveals in full a great man who until now has never been truly known. Read Less

Goodreads reviews for The Man Who Changed the Way We Eat: Craig Claiborne and the American Food Renaissance

The Return of the Wolf to Yellowstone