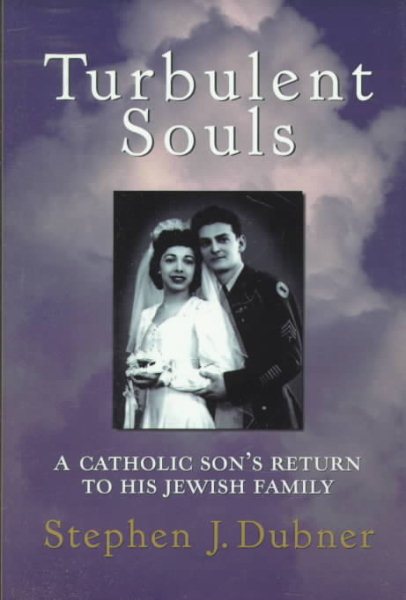 The author, the son of parents who had converted from Judaism to Catholicism, recounts his search for the Jewish heritage obscured by his Catholic upbringing Read More
Two years ago, Stephen J. Dubner wrote a cover story for the New York Times Magazine called "Choosing My Religion." It became one of the most widely discussed articles in the magazine's history. Turbulent Souls, the book that grew out of that article, is an intimate memoir of a man in search of a Jewish heritage he never knew he had. It is also a loving portrait of his parents.Stephen Dubner's family was as Catholic as they come. His devout parents attended mass at every opportunity and named their eight children after saints. Stephen, the youngest child, became an altar boy, studied the catechism, and learned the traditional rituals of the Church -- never suspecting that the religion he embraced was not his by blood.Turbulent Souls is Dubner's personal account of his family; tumultuous journey from Judaism to Catholicism -- and in his own case, back to Judaism -- and the effects, some tragic, some comic, of those spiritual transformations. His parents were Jews, born in Brooklyn to immigrant parents, but -- independent of each other and, indeed, before they met -- each converted to Christianity, only to be shunned by their families. After their marriage, they closed the door on Judaism so firmly that their children had no inkling that their background was far different from what it seemed: They didn't know, for instance, that their mother had a first cousin named Ethel Rosenberg, who was executed for treason in one of the most controversial cases of the cold war era.Stephen Dubner's is a story about discovery: of relatives he never knew existed, of family history he'd never learned, and of a faith he'd never thought of as his own and, in fact, knew nothing about. It's a fascinating, thoughtful, and thought-provoking exploration of a subject of intense interest to spiritually minded men and women everywhere. Read Less

Goodreads reviews for Turbulent Souls: A Catholic Son's Return To His Jewish Family

Freakonomics: A Rogue Economist Explores the Hidden Side of...

Think Like a Freak: The Authors of Freakonomics Offer to Ret...