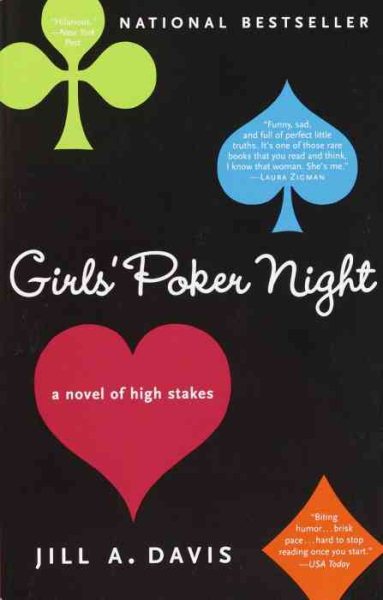 After landing a job as a reporter at the "New York News," Ruby Capote joins three other women for evenings playing poker and finds herself falling for her intriguing and challenging boss, Michael. Read More
Dissatisfied both with writing a “Single Girl on the Edge/ Ledge/Verge” lifestyle column and with her boyfriend (who has a name for his car and compulsively collects plastic bread ties), Ruby Capote sends her best columns and a six-pack of beer to the editor of The New York News and lands herself a new job in a new city. In New York, Ruby undertakes the venerable tradition of Poker Night—a way (as men have always known) to eat, drink, smoke, analyze, interrupt one another, share stories, and, most of all, raise the stakes. There’s Skorka, model by profession, homewrecker by vocation; Jenn, willing to cross county lines for true love; Danielle, recently divorced, seducer of at least one father/son combo in her quest to make up for perceived “missed opportunities.”When Ruby falls for her boss, Michael, all bets are off. He’s a challenge. He’s her editor. And he wants her to stop being quippy and clever and become the writer—and the woman—he knows she can be. Adding to Ruby’s uncertainty is his amazing yet ambiguous kiss in the elevator, and the enjoyably torturous impasse of he-loves-me, he-loves-me-not.What happens when you realize that Mr. Right has his own unresolved past? Where does that leave the future you envisioned? Ruby knows that happy endings aren’t for cowards, and she hasn’t lost hope that there are risks worth taking. As smart as it is laugh-out-loud funny, Girls’ Poker Night is a twenty-first-century His Girl Friday and a re-freshingly upbeat look at friendship, work, and love.From the Hardcover edition. Read Less