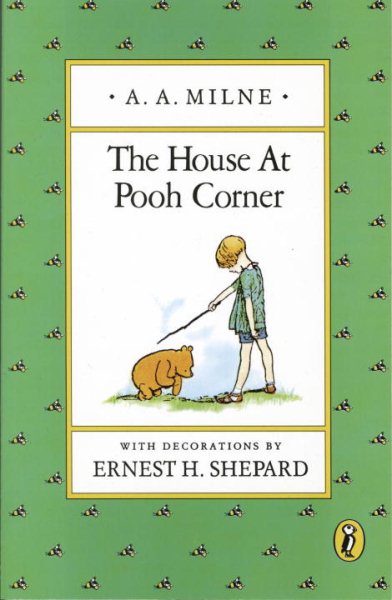 Ten adventures of Pooh, Eeyore, Tigger, Piglet, Owl, and other friends of Christopher Robin Read More
Happy 90th birthday, to one of the world's most beloved icons of children's literature, Winnie-the-Pooh! Return to the Hundred Acre Wood in A.A. Milne’s second collection of Pooh stories, The House at Pooh Corner. Here you will rediscover all the characters you met in Winnie-the-Pooh: Christopher Robin, Eeyore, Owl, Piglet, Kanga, tiny Roo, and, of course, Pooh himself. Joining them is the thoroughly bouncy and lovable Tigger, who leads the rest into unforgettable adventures. Since 1926, Winnie-the-Pooh and his friends have endured as the unforgettable creations of A.A. Milne, who wrote these stories for his son, Christopher Robin, and Ernest H. Shepard, who lovingly gave Pooh and his companions shape. These characters and their stories are timeless treasures of childhood that continue to speak to all of us with the kind of freshness and heart that distinguishes true storytelling.  The adventures of Christopher Robin, Winnie-the-Pooh, and all their friends in the storied Forest around Pooh Corner. "This is an example of a sequel in which there seems to be no letdown, and from all sides I catch echoes of most joyous reaction to it." --- New York Herald Tribune, 1928 Read Less

Goodreads reviews for The House at Pooh Corner (Winnie-the-Pooh)