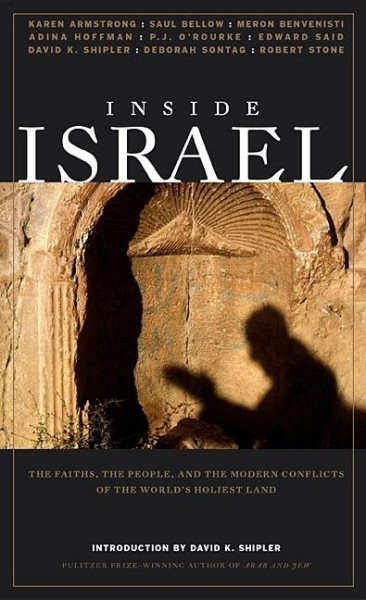 A collection of writings about the Middle East covers all facets of this unfolding story, examining such topics as the founding of Israel in 1948, the Six Day War of 1967, and the Israeli-Palestinian conflict. Read More
The Israeli-Palestinian conflict continues to crescendo, bringing with it the worst violence in the Middle East in decades. Now Inside Israel helps make sense of the region’s longstanding travails, detailing the past, present, and future of a place that has been holy to Jews, Christians, and Arabs for thousands of years. Organized into three sections?the History, a Day in the Life, and the Peace Process?the collection includes nonfiction pieces by a distinguished roster of writers, historians, journalists, and scholars. David Grossman offers a portrait of Palestinians on the West Bank, Saul Bellow captures the ?length and depth” of Jerusalem’s history while Robert Stone considers the capital’s future, and Hendrik Hertzberg analyzes the current conflict and how the U.S. needs to be involved in a peaceful solution. Other writings include contributions by David Remnick, Karen Armstrong, David Grossman, Saul Bellow, Robert Kaplan, Robert Stone, David Shipler, Deborah Sontag, Anthony Lewis, and many others. The state of this holy, contested land makes this is an essential book for everyone seeking new levels of understanding about the place whose fate, now more than ever, impacts the entire world. Read Less

Goodreads reviews for Inside Israel: The Faiths, the People, and the Modern Conflicts of the World's Holiest Land

God's Breath: Sacred Scriptures of the World -- The Essentia...

Legends: Women Who Have Changed the World Through the Eyes o...

Where Inspiration Lives: Writers, Artists, and Their Creativ...