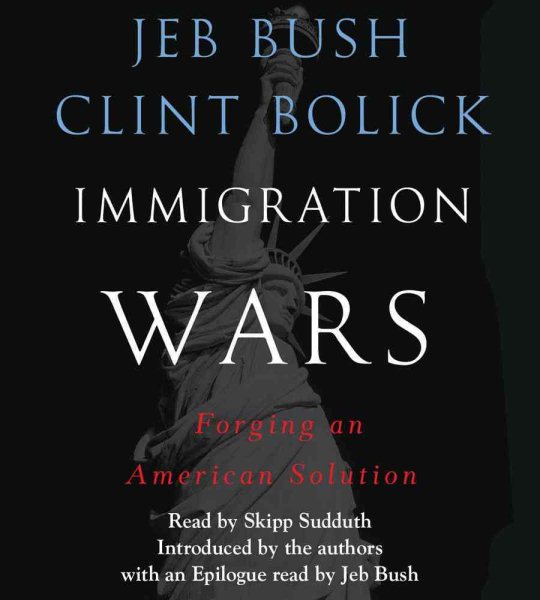 Reviews the status of immigration and its role in the American economy, proposing a six-point strategy for reforming the immigration laws to reduce the number of illegal immigrants and attract highly skilled foreign workers. Read More
From the former Republican governor of Florida and a leading constitutional litigator comes a timely and provocative look at one of the most divisive issues facing the nation today—“a must-read for every citizen, wannabe citizen, legal working resident, and those illegally working in the shadows of our economy” (The Washington Times).The immigration debate has challenged our nation since its founding. But today, it divides Americans more stridently than ever, due to a chronic failure of national leadership by both parties. Here at last is an attainable resolution guided by two core principles: first, immigration is vital to America’s future; second, any enduring resolution must adhere to the rule of law. Unfortunately, current laws are so cumbersome and irrational that millions have circumvented them and entered the United States illegally, taxing our system to the breaking point. Jeb Bush and Clint Bolick contend there are other unique factors currently at play: America’s future population expansion will come solely from immigrants. And for the first time, the U.S. must compete with other countries for immigrant workers and their skills. In the first book to offer a practical, nonpartisan approach, Bush and Bolick propose a compelling six-point strategy for reworking our policies that begins with erasing all existing, outdated immigration structures and starting over. From there, Immigration Wars details their plan for advancing the national goals that immigration policy is supposed to achieve: build a demand-driven immigration system; increase states’ autonomy based on varying needs; reduce the significant physical risks and financial costs imposed by illegal immigration; unite Mexico and America in their common war against drug cartels; and educate aspiring citizens in our nation’s founding principles and why they still matter. Here too is a viable variation of the DREAM Act as a legal status for children brought here illegally, and sound strategies for the Republican Party to revitalize their ever-decreasing core constituency. With Immigration Wars as a beacon of hope, Americans can finally solidify a national identity that is based on a set of ideals enriched and reinvigorated by immigrants, most of whom fervently embrace our core values—family, faith, hard work, education, and patriotism. Read Less

David's Hammer: The Case for an Activist Judiciary

Leviathan: The Growth of Local Government and the Erosion of...