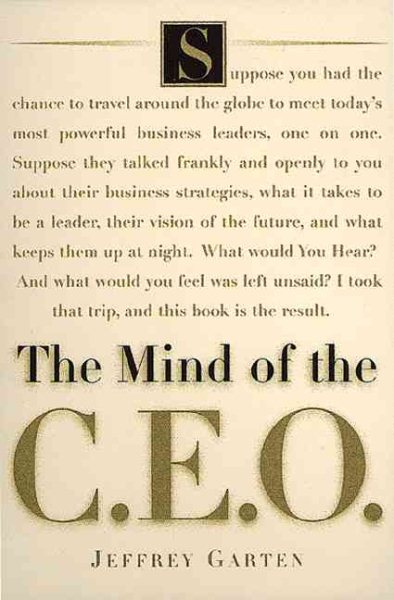 The world's foremost business leaders talk about strategy, responsibility, and the uncertainties of the future--while the Dean of the Yale School of Management reads between the lines. Read More
Based on interviews with 40 CEOs from around the world, including GE's Jack Welch, AOL's Steven Chase, BP Amoco's John Browne, and Nokia's Jorma Ollila, this book explores the thoughts of business leaders. Garten (Dean, School of Management, Yale U.) concludes that CEOs are not as powerful as many people think; that they know less than they think they do about international strategies; that they will have to begin devoting attention to employees, customers, suppliers, and communities; and although they need more trust from their employees because of the increasing value in creative workers, trust is harder to win. Garten ultimately argues for a broader role for CEOs, and one less specifically focused on shareholder earnings. Annotation c. Book News, Inc., Portland, OR (booknews.com) Read Less

Goodreads reviews for The Mind Of The Ceo: The World's Business Leaders Talk About Leadership, Responsibility The Future Of The Corporation, And What Keeps Them Up At Night

From Silk to Silicon: The Story of Globalization Through Ten...

From Silk to Silicon: The Story of Globalization Through Ten...

The Mind Of The CEO: The World's Business Leaders Talk About...