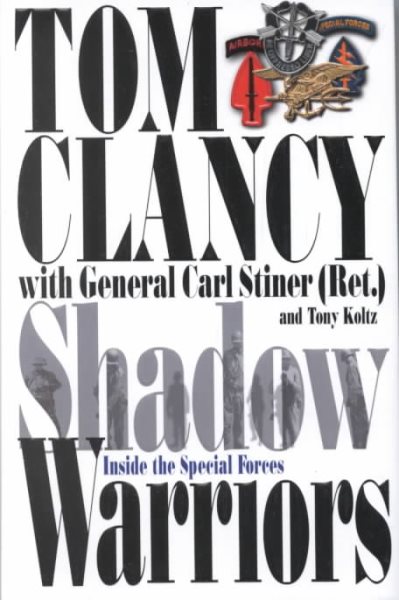 Documents the history of the special forces from the 1950s through the 1990s to discuss missions involving raids, counter-terrorism, and hostage rescue, in Vietnam, the Middle East, and other conflicts. Read More
In his first two Commanders books, Tom Clancy teamed with armor and infantry General Fred Franks, Jr., and Air Force General Chuck Horner to provide masterful blends of history, biography, you-are-there narrative, insight into the practice of leadership, and plain old-fashioned storytelling. Shadow Warriors is all of that, and more, for in the words of Lieutenant General Bill Yarborough, "There are itches that only Special Forces can scratch." The training, resourcefulness, and creativity of the SF soldier make him capable of jobs that few other soldiers could handle, in situations where traditional arms and movement don't apply. Carl Stiner was only the second commander of SOCOM, the U.S. Special Operations Command, responsible for the readiness of all the Special Operations forces of the Army, Navy, and Air Force, including the Green Berets, Navy SEALS, Rangers, Delta Force, Air Force Special Operations, PsyOps, and Civil Affairs. Together, he and Clancy trace the transformation of the Special Forces from the small core of outsiders of the 1950s through the cauldron of Vietnam and to the rebirth of the SF in the late 1980s and 1990s as the bearer of the largest, most mixed, and most complex set of missions in the U.S. military. From Vietnam and Laos to Panama and El Salvador to Lebanon, Saudi Arabia, Kuwait, and Iraq, these are stories of raids, counterterrorism, hostage rescues, reconaissance, counterinsurgency and psychological operations ?and also of building settlements, teaching civilians, cleaning up water supplies, and saving lives. It is a front-row seat to a man, an institution, and a way both of war and peace that together make this an instant classic of military history. Read Less