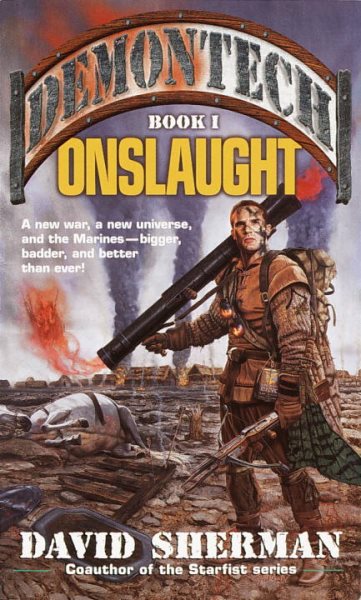 After the fall of the city of New Bally to the renegade Dark Prince and his demon allies, two survivors, Haft and Spinner, are determined to use their training as Marines to retrieve their weapons, escape the beleaguered city, and rebuild an army to drive back the invaders. Original. Read More
The diabolic armies appear invincible–but they haven’t met the Marines.The Dark Prince’s power to summon demons has made his forces second to none, and ensured his place as one of the invasion’s leaders. Not content to merely seize his father’s throne, the renegade royal dreams of world conquest–and with his army and his black arts, there is little to stop him.So unexpected, so well planned is the invasion of the free port New Bally that out of hundreds in the city, only two escape capture. Haft and Spinner will need all their courage and cunning to retrieve their weapons from their enemy-held ship, cross the open meadows surrounding the city walls, and escape into the forest beyond–where they hope to regroup and drive back the invaders. Luckily, Haft and Spinner are no ordinary men. They are Marines . . . Read Less

Starfist: A World of Hurt