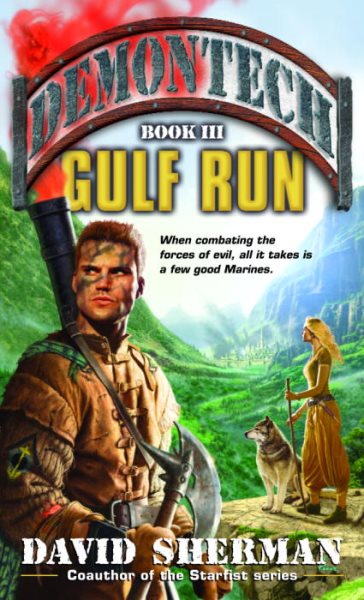 As the Dark Prince's invading armies sweep across the country, leaving death and destruction in their wake, a ragged band of rebels, led by embattled Marines Haft and Spinner, heads for their refuge by the sea, with the demon troops in hot pursuit. Original. Read More
Only a miracle can save them now.Luckily, they have one: the Marines.Like an invincible tidal wave of evil, the Dark Prince’s conquering armies roar across the land, leaving death and destruction in their wake. So far Marines Haft and Spinner have managed to stay one step ahead of the invaders, picking up hundreds of refugees and soldiers as they struggle to reach their salvation at the edge of the sea. Against all odds, they’ve even managed to inflict some damage on the vastly superior forces.Yet for every enemy soldier killed, ten more appear in his place, and the Dark Prince’s demon magic ensures their weapons are brutally effective. The outlook is not promising for the ragged band of rebels, pursued by bloodthirsty troops, hounded by bandits, and forced across a desert where death awaits all trespassers. As the noose tightens and the Dark Prince prepares the final coup de grace, it may look like Haft and Spinner and their embattled crew are finished. But these Marines have only just begun to fight. Read Less

Starfist: A World of Hurt