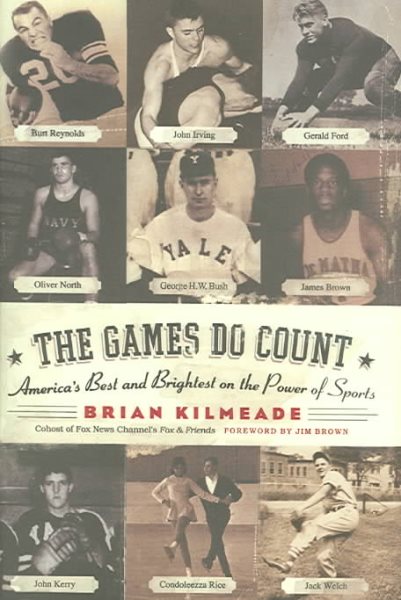 Some of America's leading celebrities, politicians, and businesspeople offer personal accounts of how a love of sports and their participation in a variety of sports shaped and influenced their lives. Read More
What do Henry Kissinger, Jack Welch, Condoleezza Rice, and Jon Bon Jovi all have in common? They have all reached the top of their respective professions, and they all credit sports for teaching them the lessons that were fundamental to their success. In his years spent interviewing and profiling celebrities, politicians, and top business people, popular sportscaster and Fox & Friends cohost Brian Kilmeade has discovered that nearly everyone shares a love of sports and has a story about how a game, a coach, or a single moment of competition changed his or her life.These vignettes will entertain, surprise, and inspire readers with their insight into the lives of America's most respected and well-known personalities -- many of whom have never before shared these memories publicly. How did Henry Kissinger's experience on an all-Jewish soccer team in Nazi Germany shape him for his future role as a statesman? Why did Tony Danza need to pick himself off the canvas and score a knockout in the boxing ring to grab the part of Tony Banta in Taxi? How did Jon Bon Jovi's genes short-circuit his dreams of playing for the New York Giants, and why did that have such an important impact on his life? How did soccer, not stand-up comedy, play such a big role in Jon Stewart's staggering success in the kill-or-be-killed world of late-night talk?Kilmeade presents more than seventy of these stories straight from the memories of the men and women themselves and those who were closest to them. From competition to camaraderie, failure to success, humiliation to glory, individual achievement to teamwork, the world of sports encompasses it all and enriches our lives. As Kilmeade observes, "They allow us to compete and sacrifice, to build character and, even if only for a moment, to transcend the everyday." The Games Do Count reveals this simple and compelling truth: America's best and brightest haven't just worked hard -- they've played hard -- and the results have been staggering! Read Less

Goodreads reviews for *THE GAMES DO COUNT*: America's Best and Brightest on the Power of Sports