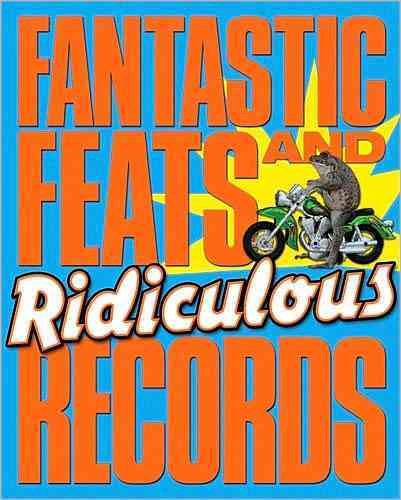 A tour of some of the most unusual and superlative achievements by people and animals throughout the world includes entries for such examples as the most-tattooed man, a cheese rolling contest, and a pair of surfing rats. Read More
People are funny--and so are many animals when they're encouraged by their human keepers! Here's a tour of the weird and wacky side of life around the world, with surprises and laughs for older boys and girls. They'll read about people with unusual bodies, including the tallest and the shortest, as well as the man with the most tattoos, a woman with the longest fingernails, an 80-year-old body builder, and a studs-and-rings-decorated woman who calls herself The Human Pincushion. Among the world's most preposterous pastimes and silliest sports recounted here are cheese rolling contests, a crying baby competition, and so-called Underwater Olympics. Just two among the dozens of animal antics recounted include a report on Olympic games for pigs, held in Moscow in 2006, and the story of Fin and Tofu, a pair of New Zealand rats who go surfing with their owner. They're all reported in detail, with color photos as supporting evidence and amusing pull-out features that add crazy details to the stories. All entries come with funny quotations from the zany people whose feats are recorded in this book. This collection of ridiculous achievements will keep kids laughing every time they turn a page. Includes 160 color photos. Read Less

Becoming Freud: The Making of a Psychoanalyst (Jewish Lives)