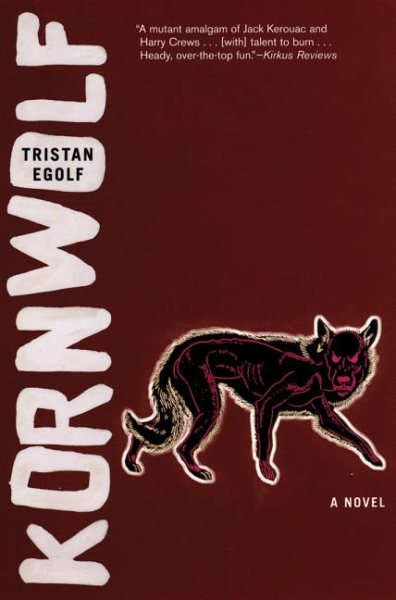 Blue Ball, a small community in rural Pennsylvania, is thrown into turmoil, thanks to the rampage of a teenage Amish werewolf, in an imaginative tale narrated by a young man who inexplicably wakes up naked in the field each morning. By the author of Lord of the Barnyard. Simultaneous. 25,000 first printing. Read More
Tristan Egolf's new novel is a book about the return of an old curse ? the Kornwolf, a ferocious werewolf whose nocturnal rampaging becomes increasingly impossible to ignore. Kornwolf takes the reader for a good old-fashioned romp in the stubble ? a journey through the slums and honky tundra of rural Pennsylvania, where nothing quite passes for good or bad, sublime or dismal, discrete or brash. And then the monotony breaks. Something ? a freak of creation ? is running amok in the fields. To solve the mystery, three generations of prodigal sons ? a writer and hometown boy who swore he'd never come back to Penn's Woods; a middle-aged former pugilist who runs a decrepit boxing gym; and a misfit, mute, beaten-down Amish boy ? are brought together by the light of a blue moon, in a town called Blue Ball. On one level this is a masterfully orchestrated, hilarious, and compelling take on the classic horror yarn, on another, Kornwolf is a social satire of suburban sprawl, closed minds, and all manners and varieties of self-satisfaction ? Amish, civilian, or... other ? in the best tradition of Tom Robbins and George Saunders. Read Less

Goodreads reviews for Kornwolf: A Novel

Lord of the Barnyard: Killing the Fatted Calf and Arming the...

Making Whirligigs and Other Wind Toys