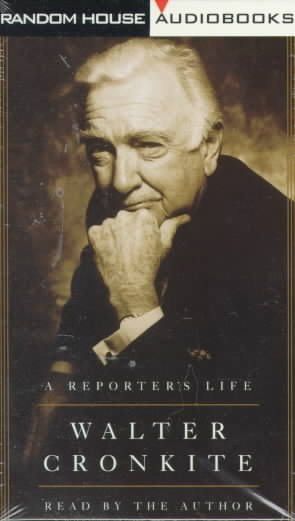 One of America's most trusted journalists describes his youth, his early career as a reporter, his work as a war correspondent, and his rise to the pinnacle of television news, sharing his views on the media, news, and the American condition. Read More
4 cassettes / 4 hoursRead by the AuthorAlso available on CDHe has been called the most trusted man in America.  His 60-year journalistic career has spanned the Great Depression, several wars, and the extraordinary changes that have engulfed our nation over the last two-thirds of the 20th century. When Walter Cronkite advised his television audience in 1968 that the war in Vietnam could not be won, President Lyndon B. Johnson said: "If I've lost Cronkite, I've lost middle America."Here is Cronkite's remarkable autobiography: his growing up in Kansas City and Houston; his service as a war correspondent for United Press; his plunge into television when it was still an infant industry; his rise to anchorman of The CBS Evening News and its eventual dominance of the airwaves.  Here is Cronkite covering space shots, political conventions, a coronation, the assassinations of the Kennedys and King.  Here are Cronkite's portraits of presidents, his behind-the-scenes tales of politics and broadcasting, his vigorous views on the future of television and the presentation of news. Read Less

Goodreads reviews for A Reporter's Life

We're Back! A Dinosaur's Story

The Pachelbel Canon, Albinoni Adagio and Other Baroque Melod...