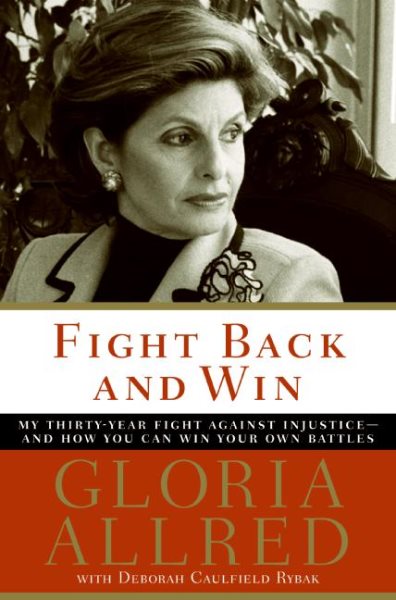 The world-renowned civil and equal rights attorney, television personality, and women's rights advocate offers a memoir of hard-fought battles and hard-won lessons, in this testament to a life devoted to the rights of others. Read More
The World-renowned women's rights attorney and civil rights advocate shares empowering life lessons learned from her career fighting on the front lines for victims' rightsFearless lawyer, feminist, activist, television and radio commentator, warrior, advocate, and winner -- Gloria Allred is all of these things and more. Voted by her peers as one of the best lawyers in America, and described by Time as "one of the nation's most effective advocates of family rights and feminist causes," Allred has devoted her career to fighting for civil rights across boundaries of gender, race, age, sexual orientation, and social class. She has taken on countless institutions to promote equality, including the Boy Scouts, the Friars Club, and the United States Senate, often drawing from her creativity and wit to achieve results. And as the attorney for numerous high-profile clients -- she has represented Nicole Brown Simpson's family, actress Hunter Tylo, and Amber Frey, Scott Peterson's girlfriend -- Allred has helped victims assert and protect their rights. Throughout her extraordinary memoir, in such chapters as "To Conquer, You Must First Conquer Yourself" and "Don't Be Victimized Twice," Allred offers colorful -- sometimes shocking -- examples of self-empowerment from her personal and professional life. Presenting nearly fifty of her most memorable cases, she takes us deep inside the justice system to show how it's possible to win, even in the face of staggering odds. Allred opens our eyes not only to the significant positive strides we've made in recent decades, but more important, to how much further we still have to go to empower all members of society -- especially women, minorities, and others who are deprived of their rights. Fight Back and Win is a powerful testament to Gloria Allred's trailblazing career and the battles she has fought alongside countless brave individuals to win justice for us all. Read Less

Goodreads reviews for Fight Back and Win: My Thirty-year Fight Against Injustice--and How You Can Win Your Own Battles