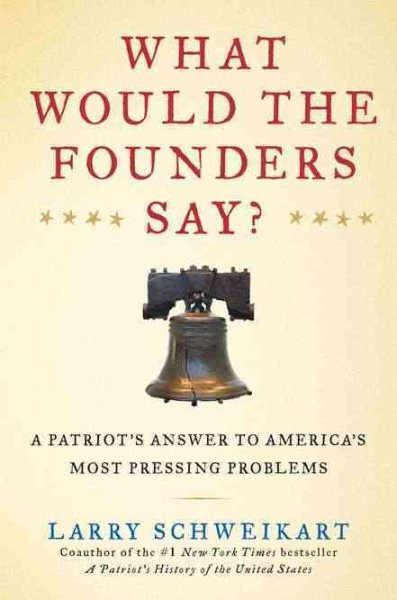 Makes comparisons between modern government practices and the views of the nation's founders, sharing recommendations for education, gun control, health care, and other important issues. Read More
"It helps, when you are lost, to find out where you made the wrong turn. But if you don't know where you started, how can you discover where you went off course? The best way for America to find its way again is to return to the ideas and principles of the Founders. They were geniuses because they inherently understood the dangers of big government."How can we fix the great problems of our time? According to renowned historian Larry Schweikart, we need to get back to our roots. And to do that, we should ask ourselves a simple question: What would the Founders say? Schweikart examines ten key issues plaguing our nation today---from health-care reform to government bailouts to gun control---and asks what would Washington, Jefferson, Madison, Hamilton, and the other men who built this country think about the path we've taken?Drawing mainly on primary documents, Schweikart also suggests what the Founders might have proposed to problems they could never have imagined in the eighteenth century. For example:On religion in public life: "How would Washington view modern secular progressives who insist on wiping out any vestiges of Christianity in American government? Taken in context with John Adams's opinions on the necessity of religion, a concrete principle emerges: that there can be no democracy without a majority of citizens' being virtuous; that virtue requires morality; and morality requires religion and belief in a higher power than oneself."On health care: "The health-care reform act promises to lead to unprecedented invasions of private choices, activities, and even well-being, for one man's necessity will soon be another man's vice. The Founders knew this and for that reason did not even entertain the notion that health care was a right, and certainly not a function of government. `Were we directed from Washington when to sow, and when to reap,' Jefferson said, `we should soon want bread.'"On bailouts: "Nowhere did the Founders show any concern about the success or failure of individual businesses. Quite to the contrary, they focused on the tendencies of governments to use any occasion, any event, as a `necessity' to expand its own power. `Those who are engaged in the management of public affairs are more subject to excitement and to be led astray by their particular interests and passions than the great body of constituents,' warned James Monroe."On the national debt: "Alexander Hamilton never called debt in general a `national blessing.' Rather, it is entirely clear that Hamilton rejected the concept that `public debts are public benefits' and that it was the funding of the debt, i.e., the system he devised to pay it off, that would provide the `national blessing.'"Written in Schweikart's informal yet informative style, What Would the Founders Say? is sure to delight his dedicated fans and anyone looking for a little clarity in a time of chaos. Read Less

Goodreads reviews for What Would the Founders Say?: A Patriot's Answers to America's Most Pressing Problems

A Patriot's History of the United States: From Columbus's Gr...