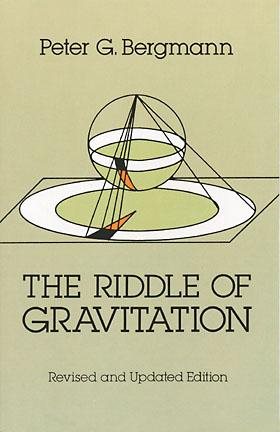 Another Dover reprint of a classic science monograph this last published by Scribner in a revised edition, 1987. Annotation copyright Book News, Inc. Portland, Or. Read More
In this thought-provoking book, written for the layman, a noted physicist offers a fresh, nonmathematical introduction to the conceptual foundations of both Newton's and Einstein's theories of gravitation. Since Einstein's general relativity theory, which deals with gravitation, requires some acquaintance with the ideas of the special theory of relativity (not in itself concerned with gravitation), the first part of the book is devoted primarily to the special theory. This section ranges from Newtonian physics through Einstein's discovery of the relativity of time and space, to the fusion of time and space into a four-dimensional whole by Hermann Minkowski. Part Two is concerned with the general theory of relativity proper. General relativity is based on the hypothesis that, under the influence of gravity, space and time are curved, rather than flat, and that all aspects of gravity can be understood in terms of geometry. Part Three is devoted to recent developments, including the search for gravitational waves, the quantum theory of gravitation, particle motion, and other topics. Five appendixes contain mathematical derivations for the reader who desires a more technical treatment of the subject. For this new edition, Professor Bergmann has also added updated material on gravitational radiation detectors, current problems in cosmology, the significance of singularities of the gravitational field, and more. The result is a fascinating excursion into the rarefied world of theoretical physics, yet one that is well within the grasp of the nonphysicist. Indeed, any intelligent layman, curious about relativity theory and its relation to current astronomical knowledge, will welcome this eloquent and cogent presentation of the subject. Read Less

Goodreads reviews for The Riddle of Gravitation: Revised and Updated Edition

The Riddle of Gravitation

Introduction to the Theory of Relativity (Dover Books on Phy...

The Riddle of Gravitation