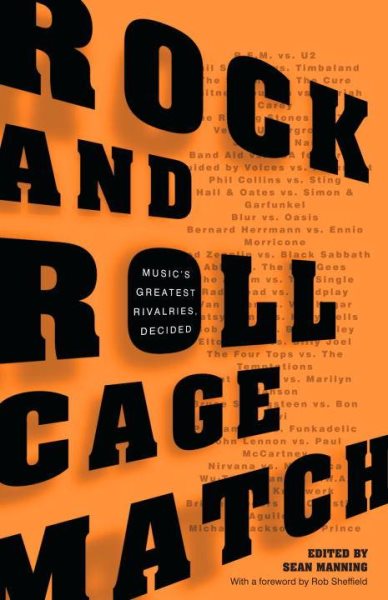 Some of America's leading music writers, musicians, and humorists render their opinions about some of rock, pop, country, and rap music's most famous and infamous rivalries, pitting Cyndi Lauper against Madonna, REM against U2, and more to reveal who influenced whom, what they stood for, and more. Original. 25,000 first printing. Read More
Music defines us. To return the favor, we’ll stick up with zealous passion for the performers and bands that we love . . . and heap aspersions and ridicule upon people who dare to place their allegiances above our own. In Rock and Roll Cage Match, today’s leading cultural critics, humorists, music journalists, and musicians themselves take sides in thirty of the all-time juiciest “who’s better” musical disputes.Marc Spitz on the Smiths vs. the Cure: “If the Smiths are its James Dean, the Cure are the Marlon Brando of modern rock.”Gideon Yago on Nirvana vs. Metallica: “Here is why Nirvana will always be a better band than Metallica. It’s not because they hit harder (they do). It’s not because they are tighter (they’re definitely not). . . . It’s because Metallica is fundamentally about respecting rules—of metal, of production, of technicality—and Nirvana is about breaking those rules down in the pursuit of innovation. Metallica was metal. Nirvana was something else.”Touré on Michael Jackson vs. Prince: “[Prince] was the wild son of Jimi, the younger brother of Rick James and Richard Pryor, the ultrasexual black Casanova who told you up front that he had a dirty mind . . . Michael held the opposite appeal. His music was often about escaping through dance or being hopeful about the world, and he came across as super-innocent.”Russ Meneve on Bruce Springsteen vs. Bon Jovi: “I really, truly mean it when I say, Mr. Springsteen, no disrespect . . . you are a legend. But in the Battle a da Jerz, when that thick chemical-waste smoke clears and the overly sprayed mall hair parts, the Jov man is the last man rockin’.”Whitney Pastorek on Whitney Houston vs. Mariah Carey: “Frankly, dry recitations of figures are just too easily negated by simple things like, say, bringing up someone’s horrible taste in choosing movie roles. Watch, I’ll do it right now: Yes, Mariah has seventeen number one singles, and Whitney only eleven. But Whitney made The Bodyguard, which is basically a classic, and Mariah starred in Glitter, a colossal suckfest of crapitude that should disqualify her on the spot.” Read Less

Bound to Last: 30 Writers on Their Most Cherished Book

What Is a Manager?

For Mothers (Cup of Comfort)