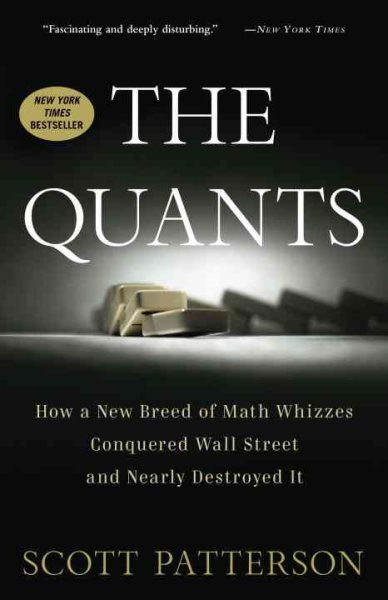 Documents the contributions of a team of young math geniuses who applied Vegas strategies to Wall Street and set in motion widespread market collapses. Read More
With the immediacy of today&apos;s NASDAQ close and the timeless power of a Greek tragedy, The Quants is at once a masterpiece of explanatory journalism, a gripping tale of ambition and hubris, and an ominous warning about Wall Street&apos;s future. In March of 2006, four of the world&apos;s richest men sipped champagne in an opulent New York hotel. They were preparing to compete in a poker tournament with million-dollar stakes, but those numbers meant nothing to them. They were accustomed to risking billions.     On that night, these four men and their cohorts were the new kings of Wall Street.  Muller, Griffin, Asness, and Weinstein were among the best and brightest of a new breed, the quants. Over the prior twenty years, this species of math whiz--technocrats who make billions not with gut calls or fundamental analysis but with formulas and high-speed computers--had usurped the testosterone-fueled, kill-or-be-killed risk-takers who&apos;d long been the alpha males the world&apos;s largest casino. The quants helped create a digitized money-trading machine that could shift billions around the globe with the click of a mouse. Few realized, though, that in creating this unprecedented machine, men like Muller, Griffin, Asness and Weinstein had sowed the seeds for history&apos;s greatest financial disaster.     Drawing on unprecedented access to these four number-crunching titans, The Quants tells the inside story of what they thought and felt in the days and weeks when they helplessly watched much of their net worth vaporize--and wondered just how their mind-bending formulas and genius-level IQ&apos;s had led them so wrong, so fast.  Read Less

Goodreads reviews for The Quants: How a New Breed of Math Whizzes Conquered Wall Street and Nearly Destroyed It