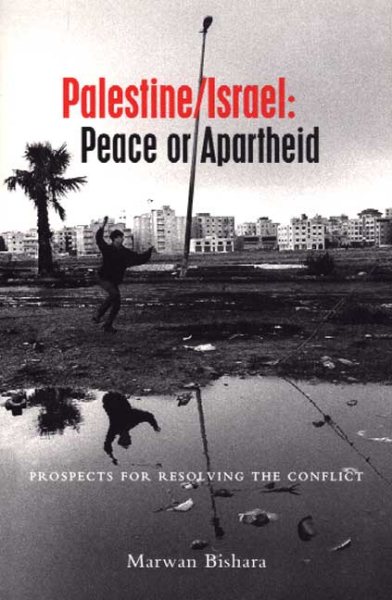 In this insightful new book, a leading Palestinian commentator,analyzes where Palestinians and Israelis are now—eight years after the Oslo Accords of 1993 and the peace process they were supposed to have begun. Bishara shows how the asymmetry of power between Palestinians (the occupied) and Israelis (the occupiers) was ignored by patrons of the Oslo peace process—notably the US. Running counter to the prevailing support for the Oslo process, this evocative new book shows how it was in fact doomed from the start. Inviting the reader to look ahead, Bishara examines the demographic, political, and security stakes, and explores the avenues that eventually could lead both sides to a just and durable peace. Read More
Offering the Palestinian perspective on the roots of the Second Intifada, Bishara (Center for Policy Analysis on Palestine) criticizes Israeli state policy as essentially colonial; suggests that the United States is far from an "honest broker" in its continued support for Israeli militarism; and describes the Oslo peace process as a diplomatic effort to derail Palestinian aspirations for a viable state by imposing a series of noncontiguous cantonments in the West Bank and Gaza, divided by Israeli settler roads and lacking control over borders, airspace, and natural resources. He locates the source of the conflict in Israeli control over land and resources via military occupation, rather than some intractable religious hatred between Muslims and Jews. The situation of Palestinians living inside Israel is also briefly examined. Annotation c. Book News, Inc., Portland, OR (booknews.com) Read Less

Goodreads reviews for Palestine/Israel: Peace or Apartheid: Prospects for Resolving the Conflict

The Invisible Arab: The Promise and Peril of the Arab Revolu...

The first three years of life