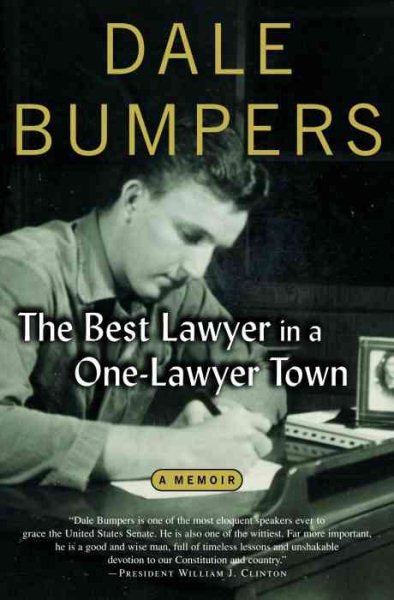 The former senator and governor of Arkansas describes growing up in tiny Charleston, Arkansas, his coming of age amid the hardships of the Depression, and his rise to success in the world of politics. Read More
Dale Bumpers was reared during the depths of the Great Depression, in the miserably poor town of Charleston, Arkansas, population 851. He was twelve years old when he saw and heard Franklin Roosevelt, who was campaigning in the state. Afterward, his father assured young Dale that he, too, could be president.Many years later, in 1970, after suffering financial disaster and personal tragedy, Bumpers ran for governor of Arkansas, starting out with one-percent name recognition and $50,000, most of which was borrowed from his brother and sister. He defeated arch-segregationist Orval Faubus in the primary and a Rockefeller in the general election. He served four years as governor and then twenty-four years in the U.S. Senate. He never lost an election.Two weeks after Bumpers left the Senate, President Bill Clinton called him with an urgent plea to make the closing argument in his impeachment trial. That speech became an instant classic of political oratory.The Best Lawyer in a One-Lawyer Town is the work of a master politician blessed with wry insight into character and a gift for rib-tickling tales. It is a classic American story. Read Less

Goodreads reviews for The Best Lawyer in a One-Lawyer Town: A Memoir

The Wall: Images and Offerings from the Vietnam Veterans Mem...