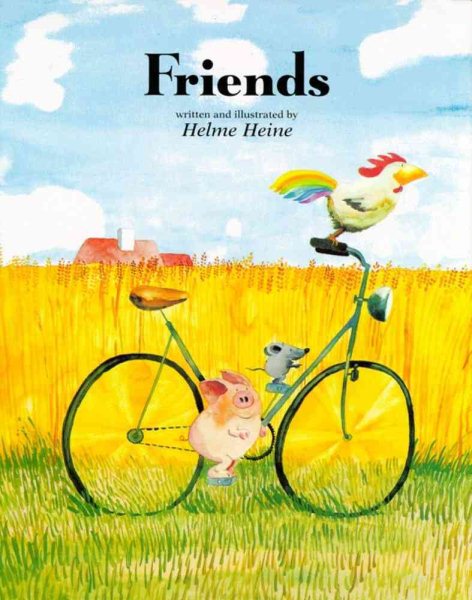 Three friends who love to be together come to the realization that sometimes it's just not possible. Read More
"Good friends always stick together. That's what Charlie Rooster, Johnny Mouse and fat Percy, the pig, always said -- and that was what they did all day long. First they woke the other animals in the barn; then they went off adventuring on their bicycle, along the roughest paths and up the steepest cliffs, quite fearlessly. One day they stopped by the village pond to play hide-and-seek. Hiding in the tall grass, Johnny Mouse discovered an old boat. The three friends decided to play pirate and later turned to fishing. When they failed to catch any fish, they went off and picked cherries to satisfy their hunger. By nightfall, they were tired and ready to sleep, but they wanted to stay together. Only disaster resulted from their attempts first to spend the night in Johnny Mouse's house, next in fat Percy's pigsty and finally in Charlie Rooster's henhouse! But though they had to sleep in their own beds, they dreamed of each other, the way true friends do. This is a joyful book, an exhilarating celebration of friendship. Its lovely, fresh watercolor paintings by the author/artist, Helme Heine, who is widely known for his earlier book, The Pigs Wedding, are filled with carefree exuberance, childlike humor and an irresistible sense of happy sharing that will captivate young and old. This is a treasure not to be missed. Read Less