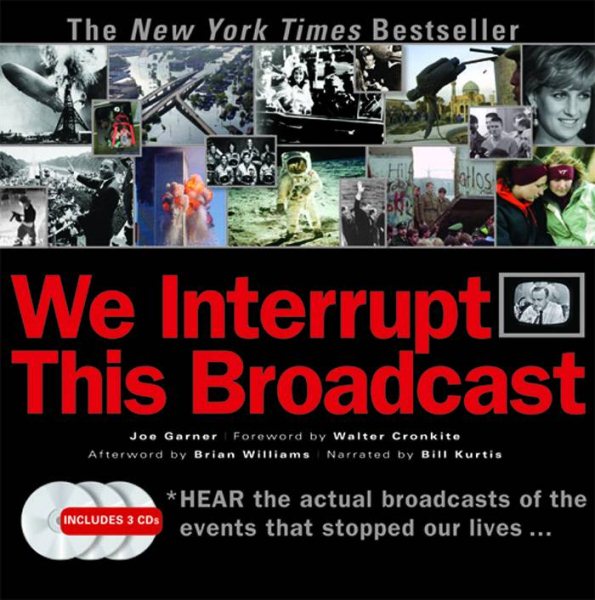 This updated version features 3 audio CDs with actual broadcasts and includes a new afterword from NBC's Brian Williams. Read More
The New York Times Bestseller The USA Today Bestseller The Wall Street Journal BestsellerWhere Were You When...?Few phrases garner as much attention as "We Interrupt This Broadcast..."Wherever we may happen to be, our lives stop for a moment, and we experience those few seconds of anxiety between the interruption and the actual announcement of what has happened.In words and images, We Interrupt This Broadcast brings to life the famous and infamous moments that were announced to us with those four chilling words.This 10th Anniversary Edition features 3 audio CDs with actual broadcasts and includes a new afterword from NBC's Brian Williams.From the dawn of electronic media to today, from the catastrophe of the Hindenburg to the tragic events of September 11, 2001, these are the forty-three events that stopped us in our tracks and changed our world. We Interrupt This Broadcast recounts the details of the events and spotlights the photographs that tell the stories. Accompanying the book are two digitally mastered compact discs containing over two hours of audio from the events, narrated by award-winning journalist Bill Kurtis.These heart-stopping moments include both the famous words you remember and rare audio footage that will take you back into the magnitude of the event. Share with your friends, family, children and grandchildren your memories of where you were when the world stopped and held its breath in anticipation.PRAISE FOR WE INTERRUPT THIS BROADCAST:"News junkies can go in for the good stuff with this book and CD set...an impressive tome of rare photos and historical accounts...."— Time Out New York"...the ability of the electronic media to capture history couldn't be more powerful—or chilling."— Biography magazine"Altogether, the book and CDs are a keeper, offering both valuable history lessons and a dramatic record of the definitive moments for generations of Americans."—Publishers Weekly"The CDs deliver an exciting, engaging exercise. The events are all hugely memorable. The bits of historic sound are powerfully evocative." Baltimore Sun"Garner has done a masterful job of collecting these moments, and with the accompanying CDs, one can listen over and over to the moments that shaped this century."—BooklistEssential for EVERY library—home and public This is the latest in this series of books with CDs produced by Joe Garner for Sourcebooks. For the last 10 years updated versions were published, as enough news events occurred to warrant a new edition. We are now up to THREE CDs of material, carrying us to 2007 with the horrific massacre at Virginia Tech University. While most of the events captured here—starting in 1937 with the explosion and crash of the Hindenburg—are tragedies, there are a few glimmers of hope, usually involving the space program in the 1960s and 1970s.In fact, the only other upbeat story included is the end of World War II (and the fact that there even was a war is not very upbeat.). But as philosopher George Santayana said (and has often been repeated with minor changes: "Those who cannot remember the past are condemned to repeat it.". And that is reason enough to get this book, play the CDs, look at the photos and, if you have children, share the experience with them. The first 2 CDs are the same as prior editions yet it is still worth getting this edition—if you already own the earlier ones, [then] for the third disc. (Then give your older copy to a friend or, better yet, donate to your local library.) Steve Ramm, "Anything Phonographic"May 1, 2009 Amazon Review Read Less

Goodreads reviews for We Interrupt This Broadcast: The Events That Stopped Our Lives...from the Hindenburg Explosion to the Virginia Tech Shooting