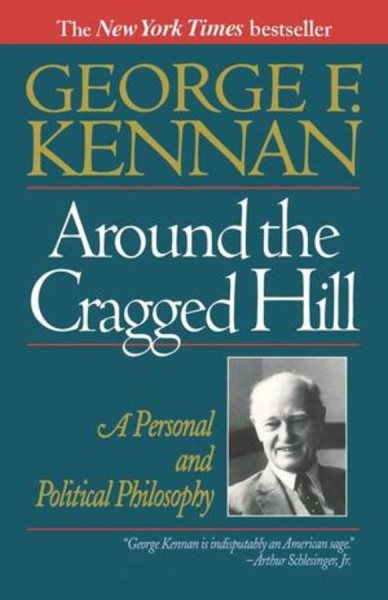 “[Kennan] comes to us…as ambassador of a generation nearly gone and a conservatism so responsible, dutiful and so long extinct it may look revolutionary….As ever, Kennan in the present book has fulfilled his responsibility admirably.” —Chicago Tribune Read More
"I have attempted to take the high ground,” writes George F. Kennan in the foreword to this illuminating work, "trying to stick to the broader dimensions of things—the ones that would still be visible and significant in future decades." Against the background of a century of wars, revolution, and uneasy peace, Mr. Kennan advances his thoughts on a broad front: how the individual's quest for power can transform a government into a confusion of ambition, rivalry, and suspicion; how a nation's size can create barriers between the rulers and the ruled; why America must first set its own house in order before it can become a beacon to others. Deeply aware of the pressures under which public officials must act, Mr. Kennan sees a government in Washington that is forced to make decisions on issues of the moment, often without regard for long-term consequences. Neither the legislature, responsive to the interests of a narrow constituency, nor the executive branch, swamped by urgent problems at home and abroad, has the time or inclination to look far beyond the next election. Lost entirely is a vital element in any democracy: deliberation based upon study, review, and judgment. To address problems that defy quick political solutions, Mr. Kennan here boldly lays down a blueprint for a Council of State, a nonpolitical, permanent advisory board that would stand alongside yet apart from government policy makers, with the prestige to be heard "above the cacophony of political ambitions." Rich in historical example, this volume is a brilliant summing up of the experience and thought of the man the Atlantic described in a cover story entitled "The Last Wise Man" as: "diplomat, scholar, writer of rare literary gifts, one of most remarkable Americans of this century." Read Less

Goodreads reviews for Around the Cragged Hill: A Personal and Political Philosophy

Rarities & Remixes by Point of Grace