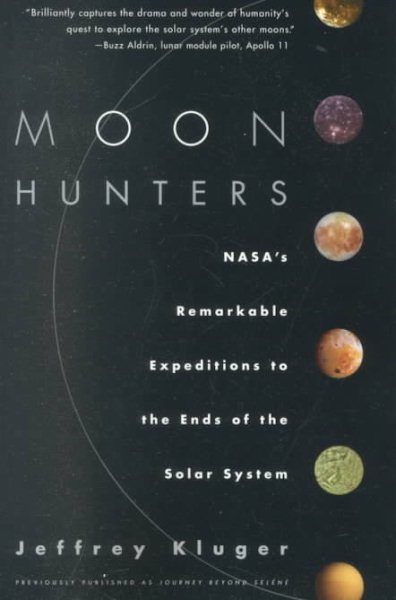 A look at the scientists who design and fly the spacecraft exploring the outer reaches of the solar system discusses unmanned missions to Jupiter, Saturn, and Neptune. Read More
In Moon Hunters, bestselling author Jeffrey Kluger tells the thrilling story of some of the most remarkable heavenly bodies known -- the solar system's sixty-five moons -- and the extraordinary people who have explored them all. Chronicling lunar exploration from the first attempts by NASA's Jet Propulsion Laboratory to explore our own moon to the triumphant conquest of the outer planets, Moon Hunters is an adventure story full of drama, danger, and suspense. While taking the reader on a spellbinding journey to the eerie landscapes of the moons themselves, Moon Hunters offers a riveting account of the scientists and spacecraft responsible for unlocking the secrets of the cosmos -- and perhaps of life itself. Read Less

Goodreads reviews for Moon Hunters: NASA's Remarkable Expeditions to the Ends of the Solar Systems

Splendid Solution: Jonas Salk and the Conquest of Polio

The Narcissist Next Door: Understanding the Monster in Your...