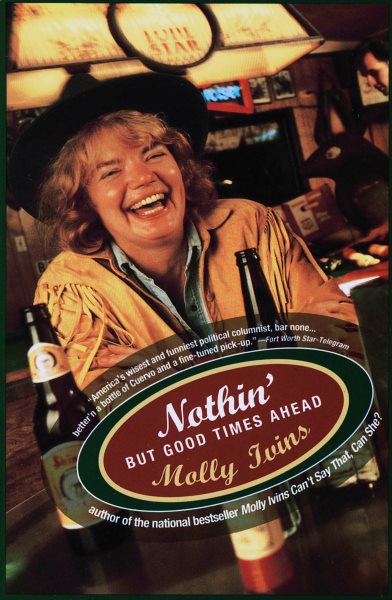 The nationally syndicated columnist takes an outspoken and humorous look at the 1992 presidential campaign and its participants, Texas politics, Ross Perot, and the Clinton presidency Read More
She's back.  Molly Ivins, our most perceptive, outrageously funny political commentator, has given us an uproarious new book.In Nothin' But Good Times Ahead, Ivins proved that no one has a steadier gaze or a quicker trigger finger, as she hits the bull's-eye in such targets as George Bush, Bill Clinton, Camille Paglia, the Clarence Thomas hearings, and the ethics-twisting, English-slaughtering pols of her beloved Texas.  Here's Molly on: The 1992 Republican Convention: "Many people did not care for Pat Buchanan's speech; it probably sounded better in the original German."Texas politics: "Better than the zoo, better than the circus, rougher than football, and even more aesthetically satisfying than baseball."Gibber Lewis, former House Speaker of the Texas State Legislature: "He once announced, 'This is unparalyzed in the state's history." Another Gibberism: "It could have bad ramifistations in the hilterlands."  Read Less

Goodreads reviews for Nothin' But Good Times Ahead

Molly Ivins Can't Say That, Can She?

Who Let the Dogs In?: Incredible Political Animals I Have Kn...