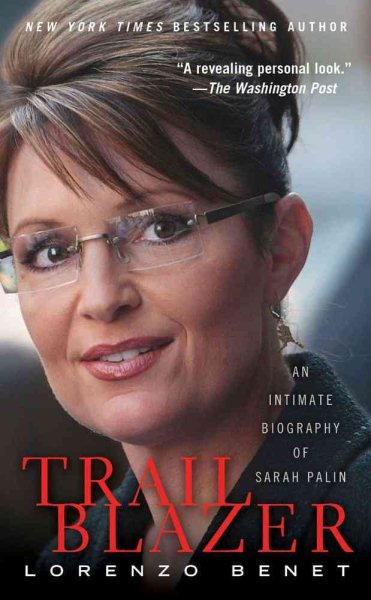 Describes the life and career of the Alaskan governor, from her early life and education to her political career and her Vice-Presidential candidacy in the 2008 Presidential election. Read More
A FASCINATING INSIDE LOOK AT ONE OF THE BEST-KNOWN WOMEN IN AMERICAN POLITICS AS WE HAVE NEVER BEFORE SEEN HERShe’s a real-life American success story. Alaska’s youngest governor . . . and the first woman. A small-town girl who wasn’t content to keep things small.People magazine assistant editor Lorenzo Benet met with Sarah Palin and her family just weeks before the announcement that she would be the Republican vice-presidential nominee. In this groundbreaking biography, he shows us the real Sarah Palin—untouched by the cameras and the campaign trail. From her basketball games and beauty pageants as a young woman in Alaska, to her relationship with Todd and their family, to her controversies and triumphs in office, and culminating with the manic excitement of the 2008 election, its controversial aftermath, and the post-election birth of her grandson, Trailblazer is the definitive, uncensored portrait of this extraordinarily complex woman.Features 8 pages of behind-the-scenes family and campaign photographs! Read Less

Goodreads reviews for Trailblazer: An Intimate Biography of Sarah Palin

Landing It: My Life On And Off The Ice