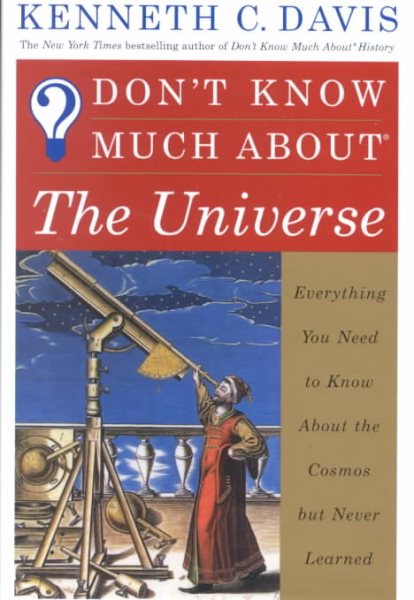 A tour of space exploration covers the theories, people, and discoveries relevant to human interest in the heavens, from ancient astrology to the visions of modern-day Hollywood directors. Read More
From the ancients who charted the stars, to Jules Verne and Flash Gordon, to The X-Files, Apollo 13, and Armageddon, subjects engaging the heavens and outer space have intrigued people through the ages. And yet so many of us look up at the night sky and have to admit that we are totally in the dark when it comes to the most basic facts about the heavens.Into the void steps Kenneth C. Davis with the latest addition to his bestselling and critically acclaimed DON'T KNOW MUCH ABOUT® series. Don't Know Much About® the Universe is a lively and readable guide to the discoveries, theories, and real people that have shaped space exploration, from the beginning of civilization to the present. Using the now-familiar and popular question-and-answer format that has appealed to millions of readers, Davis sets his sights on a subject that has inspired the greatest of fascinations, produced many popular misconceptions, and ultimately helped shape the course of history.From a historical overview of man's preoccupation with space to a guided tour of our solar system and beyond, Kenneth Davis seeks, as always, to entertain as he teaches. He looks at issues that go beyond the bounds of simple "Science 101" and asks the kinds of questions we may have wanted to ask back in school but didn't have the nerve.For example:Who dug those canals on Mars? Is a "blue moon" really blue?What does astronomy have to do with astrology? Will we end with a bang or a whimper? Read Less

Goodreads reviews for Don't Know Much About The Universe: Everything You Need to Know About the Cosmos but Never Learned

Don't Know Much About the 50 States