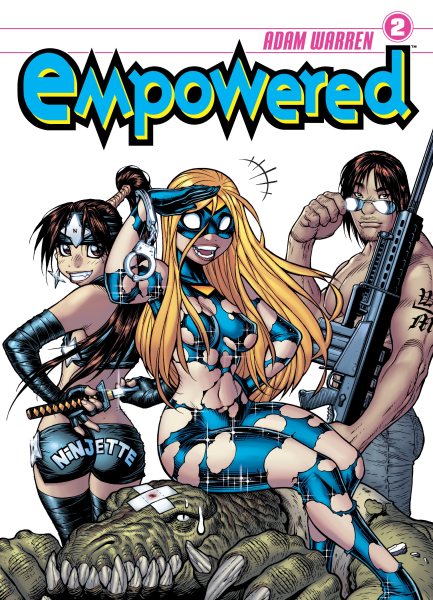 Not only is the costumed crimefighter "Empowered" saddled with a less-than-ideal superhero name, but she wears a skintight and cruelly revealing "supersuit" that only magnifies her body-image insecurities. Worse yet, the suit's unreliable powers are prone to failure, repeatedly leaving her in appallingly distressing situations-- and giving her a shameful reputation as the lamest "cape" in the masks-and-tights business. Read More
Empowered returns for further misadventures, as a distress-prone girl wonder struggles with life on the superheroic C-list! Clad-or unclad, as fate would too often have it-in her embarrassingly revealing and maddeningly unreliable supersuit, she fights a neverending battle against overly sensitive supervillains, irrationally envious superheroines, and her own body-image issues! Meanwhile, her boyfriend, Thugboy, plays with fire when he foolhardily attempts to compliment his profoundly insecure sweetheart on the awe-inspiring power of her... well, booty. And her often-inebriated gal-pal, Ninjette, pursues a drunken and ultimately disastrous mission to acquire Empowered some respect-by force if necessary! All this, plus crossword-obsessed goons, speech-impaired superbeasts, "Ninjas Gone Wild," and even a few self-help hints from nigh-omnipotent cosmic overlords! You know, the usual.For Mature Readers. Read Less