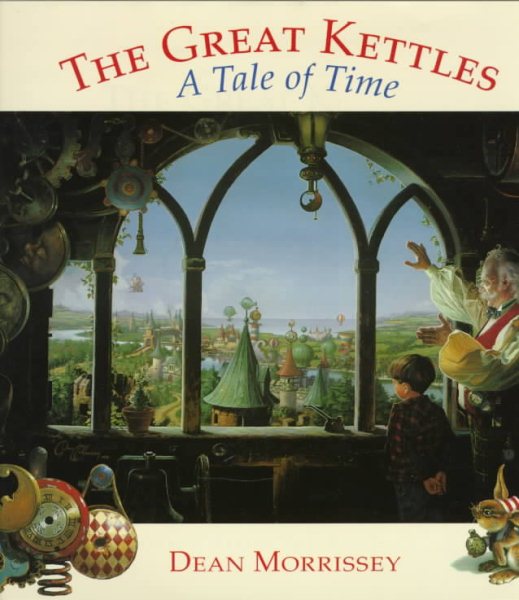 Hoping to visit the friend he had to leave behind when his family moved, Joey builds a time machine and makes an eventful trip to the land where Father Time, Mother Nature, the Man in the Moon, and other such characters live Read More
Dean Morrissey's first book, Ship of Dreams, leaped onto best-seller lists in 1995, its debut season. A delightful story of young Joey and his nighttime journey to meet the legendary Sandman, the book introduced Morrissey's richly detailed paintings to a welcoming audience of children and adults.Here, in a brilliant new tale, the same Joey "invents" a time machine so he can sneak off to visit his best friend, Henry, who still lives in Joey's old neighborhood. Before he knows it, Joey finds himself sitting in his machine, flying around the attic of his new house, and growing smaller and smaller. Soon, to his amazement, he flies right into the colorful label of an old fruit box that shows an island landscape called the Great Kettles.Joey's adventures in the Great Kettles begin when he meets Father Time. He then encounters some of the other extraordinary residents of the Great Kettles, those who make the world go 'round - the Man in the Moon, the Four Winds, and Mother Nature herself. He also bumps into his old friend, the Sandman, and meets Professor Throttleman, the amazing inventor who undertakes to get Joey back home. Along the way, Joey climbs into a lighthouse-tall clock that controls time everywhere, peers through a Time Telescope, rides the Great Kettles train with the Cow That Jumped Over the Moon, and tries to return home aboard the Time Elevator. Read Less

Goodreads reviews for The Great Kettles: A Tale of Time