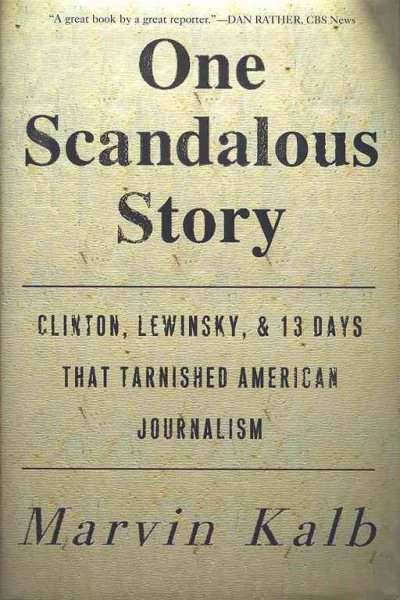 The author draws on his four decades of TV journalism experience to analyze media coverage of the Clinton-Lewinsky scandal, lending valuable historical and personal perspective the recent events, and past presidential pecadillos. Read More
In 1963 Marvin Kalb observed the Secret Service escorting an attractive woman into a hotel for what was most likely a rendezvous with President Kennedy. Kalb, then a news correspondent for CBS, didn't consider the incident newsworthy. Thirty-five years later, Kalb watched in dismay as the press dove headfirst into the scandal of President Clinton's affair with White House intern Monica Lewinsky, disclosing every prurient detail. How and why had the journalistic landscape shifted so dramatically? One Scandalous Story seeks to answer this critical question through the inside story of thirteen days -- January 13-25, 1998 -- that make up a vital chapter in the history of American journalism. In riveting detail, Kalb examines just how the media covered the Lewinsky scandal, offering what he calls an "X-ray of the Washington press corps." Drawing on hundreds of original interviews, Kalb allows us to eavesdrop on the incestuous deals between reporters and sources, the bitter disagreements among editors, the machination of moguls for whom news is Big Business, and above all, the frantic maneuvering to break the story. With fresh insight, he retraces decisions made by Michael Isikoff of Newsweek, Internet renegade Matt Drudge, Jackie Judd of ABC, Clinton-basher Lucianne Goldberg, Susan Schmidt of The Washington Post, Jackie Bennett of the Office of the Independent Counsel, and other key players in this scandal that veered from low comedy to high drama. Through the lens of those thirteen turbulent days, Kalb offers us a portrait of the "new news" in all its contradictions. He reveals how intense economic pressures in the news business, the ascendancy of the Internet, the blurring of roles between reporters and commentators, and a surge of dubious sourcing and "copy-cat journalism" have combined to make tabloid-style journalism increasingly mainstream. But are we condemned to a resurgence of "yellow journalism"? Painstakingly documented and sobering in its conclusions, One Scandalous Story issues a clarion call to newsmakers and the American public alike: "Journalism can change for the better -- and must." Read Less

The last ambassador: A novel