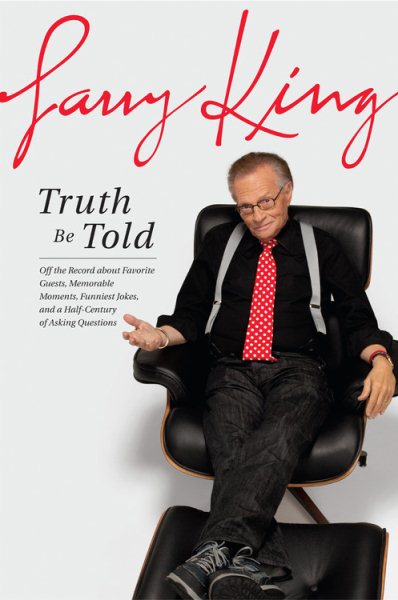 The former CNN host looks back on his fifty-year career, reflecting on how much the world has changed during those years, the famous people he has met, and his own life behind the scenes. Read More
Truth Be Told is a revealing and irresistibly entertaining look back on Larry's remarkable run at CNN, and an honest look at Larry's own life behind the scenes. After more than a half-century of asking questions, Larry King suddenly found everyone wanted answers from him. Was Larry King Live, CNN's highest rated program, ending after three decades? Was Larry getting divorced again? The paparazzi aimed their cameras at Larry. Jay Leno and other late-night talk-show hosts were having fun at his expense. And a cloud of uncertainty hovered over CNN. All of this forced Larry to look at changes in all aspects of his life, ultimately leading to his decision to leave Larry King Live and devote more time to his marriage and children.Larry reflects on how much the world has changed around him over the course of his fifty-year career, and he has a lot to say about everything and everyone: from marriage, politics, sports, entertainment, to the justice system, broadcasting, and the American future. Truth Be Told is a candid and surprising look inside the monumental career of one of the most powerful and legendary talk-show hosts as he signs off from the nightly television program that has been close to all of our hearts. Read Less

Goodreads reviews for Truth Be Told: Off the Record about Favorite Guests, Memorable Moments, Funniest Jokes, and a Half Century of Asking Questions

How to Talk to Anyone, Anytime, Anywhere: The Secrets of Goo...