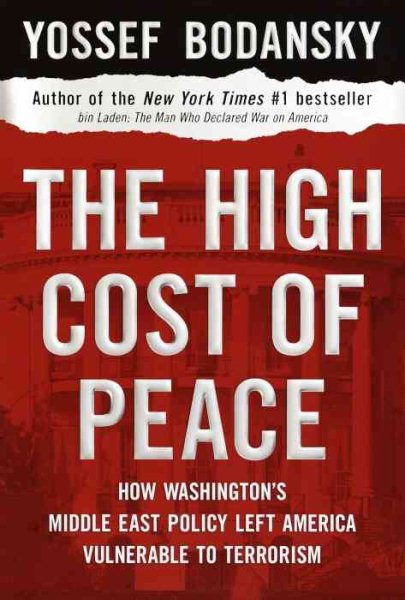 Chronicles U.S. efforts since the Gulf War to negotiate peace between the Israelis and the Palestinians, citing policy decisions that the author feels left America vulnerable to the September 11 attacks. By the author of bin Laden: The Man Who Declared War on America. Read More
In The High Cost of Peace, terrorism expert Yossef Bodansky uncovers the bitter legacy of a peace process that has cost tens of thousands of lives, emboldened such outlaw countries as Iran and Iraq, enriched Arab militaries with billions of U.S. dollars, and mobilized an underground network of terrorist cells around the globe. He reveals in engrossing detail the political undercurrents and secret deals that have shaped and destabilized the region, the confluence of events leading up to September 11, and the inside story of a dangerous quest for peace that has led to a war unlike any the Middle East has seen before - the details of which rarely make the anti-Israeli-tinged evening news.At the heart of the failed peace negotiations is the utopian notion that Israel's militant enemies even want peace. This book proves once and for how the United States is put in perpetual danger of terrorist attack because of its repeated blunders in dealing with the Arab world and the vital contributions of Israel - America's staunchest ally in this turbulent region - to U.S. security interests. Meanwhile, as many Arab leaders play to American and European news cameras with empty promise of peace, they are secretly conspiring with terrorists to fulfill their ultimate goal: the complete annihilation of the Israeli state. Read Less

Secret History of the Iraq War

The Secret History of the Iraq War

Bin Laden: The Man Who Declared War on America